Chile to suspend trade talks with Israel over Gaza bombing

Chilean deputies and senators of Palestinian origin went to the Foreign Ministry on Monday to demand a stronger position against Israel regarding its actions in the Gaza Strip. 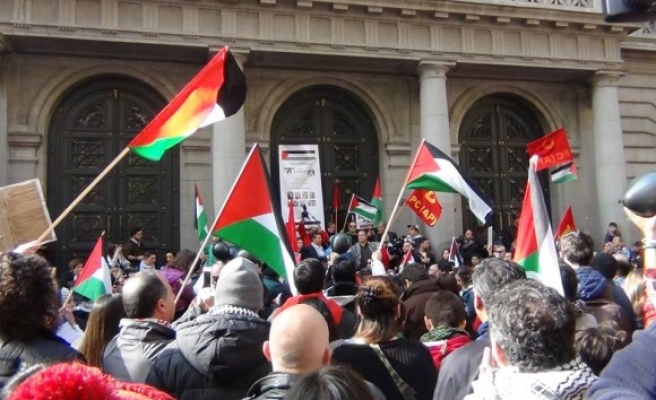 Chile has suspended Free Trade Agreement (FTA) negotiations with Israel and id considering the withdrawal of its ambassador to Tel Aviv in protest against the Israeli bombing campaign on Palestinian civilians in the Gaza Strip.

The Chilean-Palestinian parliamentary group told HispanTV that the Chilean government will also seek Israel's condemnation by the UN Security Council (UNSC) after meeting with the Chilean Foreign Heraldo Munoz.

Chilean deputies and senators of Palestinian origin went to the Foreign Ministry on Monday to demand a stronger position against Israel regarding its actions in the Gaza Strip.

With the number of victims of Israeli attacks passing the 200 mark, parliamentarians of all backgrounds have demanded urgent action by the Chilean government.

Home to a large Palestinian community, the aggression on Gaza has not gone unnoticed in Chile.

Activists calling for the boycott of Israel in response to its breaches of international law in ragards to its treatment of the Palestinians will hope the example set by Chile will open the way for other countries to do the same.

it normally never happens but for once chile can be proud

This step taken by Chile is a courageous one and should be followed by other countries, despite the aggressive propaganda campaign that Israel mounts with the help of the US and Western European countries to gag any criticism of Israel's policies of dispossession and murder against Palestinians. Any other country doing what Israel is doing to the Palestinians would meet the full wrath of the "international community". It seems Libyan civilians were worth saving, but not Palestinian lives.

Courageous decision in this hypocritical world

Salutes to your country. Viva Chile

Big big respect to Chile. As a UK citizen I'm disgusted at my governments lack of anything against the Israeli murderers. After all, they were responsible for this dating back to 1946!!!

Hey Francis, us Chileans are proud and this isn't the first time!!! You're an ass

After the fall of Muhammad Morsi, no active leader is there to stop Israel. Turkey, Qatar and now Chile need to take brave action to stop Israel for now and forever. Why is Iran quite by the way?