FARC has angered Colombians in recent weeks with an increase in attacks that have left a heavy economic and social price tag. 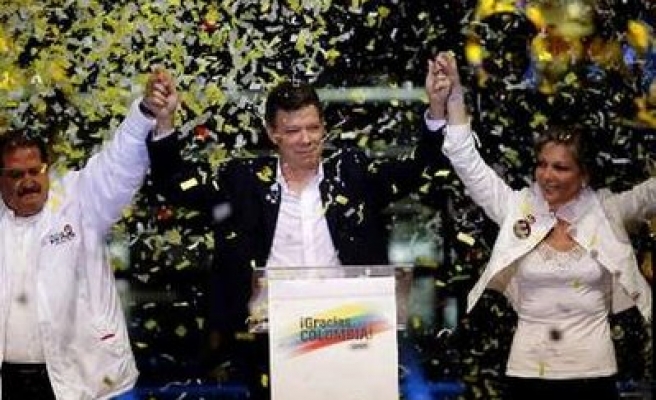 Colombia's President Juan Manuel Santos was sworn in to a second term on Thursday promising to bring peace and equality to the nation, but warned Marxist rebels that talks to end five decades of war could rupture if hostilities against civilians continue.

"Members of the FARC: you have been warned!" he said.

Santos bet his political legacy on ending a conflict with the Revolutionary Armed Forces of Colombia (FARC) that has killed more than 200,000 people, displaced millions and left great swathes of rural terrain seeded with land mines.

But even though he was elected on a platform of peace and benefited from progress in talks, the FARC has angered Colombians in recent weeks with an increase in attacks that have left a heavy economic and social price tag.

"Acts of peace, that's what the Colombian people ask for today," Santos said after receiving the sash of office and asking the FARC to stop all violence against women and children.

"I will employ all my energy to bring peace during this mandate."

The center-right Santos pledged to build on four years of economic growth, improvements in health and education and a make a bigger stride toward equality in a nation that has one of the world's widest income gaps.

"Imagine for a minute, a country in total peace, with equality and with the highest level of education in the region," he told 11 heads of state and other dignitaries at the ceremony.

The former journalist won re-election in June with the aid of leftist parties that back negotiations to end the war. In an unusual display of solidarity, they joined forces with Santos to block former President Alvaro Uribe's right-wing candidate, who had sought to scrap talks. Negotiations began in late 2012.

Although Santos wants his second mandate to move the nation toward a post-conflict era, it will likely be a bitter four years.

Uribe - voted recently to the Senate - has invigorated the opposition, trimming Santos' majority in Congress and probably complicating passage of key reforms and peace-related deals.

Uribe and his Democratic Center party did not attend the swearing-in ceremony.

A still-popular strong man, Uribe is a bitter rival of Santos and vehemently against the negotiations, preferring to defeat the group on the battlefield instead of allowing it a peaceful entry into society and a possible role in politics.

Any agreement with the FARC - which began its armed struggle in 1964 - must first go to a referendum and then to Congress for the passage of laws that would deal with the implementation of peace. He is also in exploratory peace talks with the smaller rebel group, the National Liberation Army (ELN).

While Santos, the scion of one of Colombia's most powerful families, won re-election promising an end to the war, 45 percent of voters backed his rival and sought an end to the talks.

Uribe's party will likely try to obstruct legislation that would enable FARC rebels to enter the political system without serving considerable jail time.