Negotiators have so far reached partial agreements on three of the five agenda points: political participation for the FARC, an end to the illegal drugs trade, and land reform. 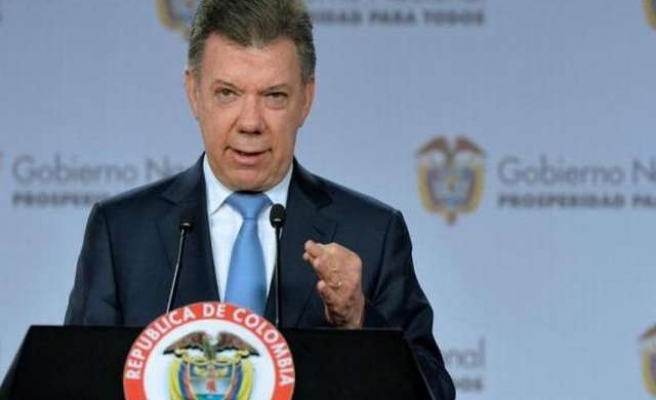 General Ruben Dario Alzate, who heads the Titan task force in the Pacific department of Choco, was captured on Sunday afternoon by the Revolutionary Armed Forces of Colombia (FARC), along with another military official and a civilian.

"Tomorrow negotiators were to travel to another round of talks in Havana," Santos said early on Monday. "I will tell them not to go and that the talks are suspended until these people are released."

"We will be attentive in the next 24 hours to the evolution of these incidents," Santos said.

Alzate was captured after disembarking from a boat on a river near the city of Quibdo, during a visit to an energy project, Defense Minister Juan Carlos Pinzon said.

Another official and a lawyer travelling on the boat were also captured, although a soldier at the wheel of the launch managed to escape and inform the authorities.

Santos had publicly warned the FARC, formed in 1964 to fight for rural land reform but now involved in the drug trade, that it risked jeopardizing the peace process after the abduction of two soldiers last week and continued attacks on infrastructure.

The rebel group has stopped kidnaps for ransom but maintains that military personnel are fair targets in the absence of a ceasefire.

Alzate entered the area in a civilian capacity, breaking security protocol, Santos said. He was not accompanied by bodyguards.

Troops will be sent to the area to attempt to rescue the three captives, the president said. The government will also work with the International Committee of the Red Cross for their release.

FARC leaders in Havana have occasionally dissociated themselves from violent attacks by lower ranks in Colombia, raising the possibility the high command could defuse tension by securing the general's release.

The halt is not the first time the two-year-old talks have been suspended. The FARC stopped them in August 2013 to review the government's plan to put any peace deal to a referendum. Negotiations resumed several days later.

The FARC and government negotiators have reached partial agreement on three of the five points of the agenda for the talks, including land reform, the drug trade and political participation for the rebels.