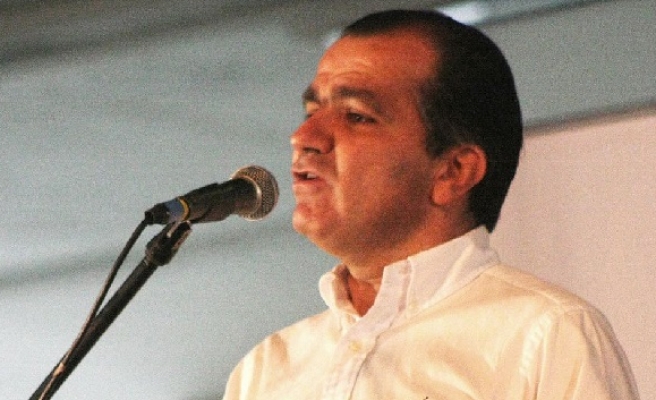 The scandal surrounding Colombian presidential hopeful Oscar Ivan Zuluaga widened on Tuesday with new video showing the candidate conversing with the hacker accused of intercepting communications between FARC guerrillas and the government during peace talks.

Parts of the video, in which one can hear and see the Democratic Center presidential candidate Oscar Ivan Zuluaga with jailed hacker Andres Sepulveda were made public last week by Semana Magazine and today a further 21 minutes were released. Oscar Ivan Zuluaga has resisted calls for his resignation and has denied any wrongdoing.

Oscar Ivan Zuluaga, who has proposed an immediate suspension of the peace dialogues between the FARC guerrillas and the government should the Democratic Center be victorious on the May 25 elections, is now accused of trying to sabotage these dialogues which have been underway since 2012.

“Surely there will be new video and new traps as they look for a way to undermine our campaign,” said Oscar Ivan Zuluaga in a press conference in Bogota.

Rafael Revert, a Spanish citizen who recorded the video and who was in the employ of Andres Sepulveda as an internet security expert, is now in a witness protection program. The video has stoked controversy in Colombia as there are references made to information accessed from U.S. military reconnaissance aircraft and top ranking FARC (Revolutionary Armed Forces of Colombia) guerrillas.

These include the guerrilla group’s commander, Rodrigo Londoño Echeverri alias Timochenko, and a member of their negotiating team in Cuba, Ivan Marquez.

“Andres Sepulveda created a program in which it was possible to sabotage President Juan Manuel Santos’ campaign by way of social networks and spy on his personal communications,” said Revert in a declaration to the district attorney’s office as cited by El Espectador newspaper. “Sepulveda’s mission was to wage a cyber-attack against Santos.”

Claims have been reported in both the El Tiempo and El Espectador national newspapers that a montage gleaned from videos on YouTube was used to construct a message with FARC member Ivan Marquez’ voice to link him to a motorcycle bomb attack in the town of Pradera in southern Colombia in January which resulted in one death and 61 injuries. Ivan Marquez is a high ranking member of the FARC secretariat.

The Democratic Center’s vice presidential candidate Carlos Holmes Trujillo adamantly claims that this video is part of a dirty tricks campaign created by JJ Rendon the former campaign strategist for President Santos. JJ Rendon resigned after allegations of receiving US$12 million to act as a go between for drug lords and the government when facilitating the terms of their surrender.

“We want to insist that the video is a fabrication and the result of a strategy applied by JJ Rendon which he has done on many occasions in campaigns in Mexico, Venezuela, El Salvador and Panama.,” said Carlos Holmes Trujillo in an interview with El Espectador. “There are clear moments where the video has been doctored.”

According to Human Rights Watch, the long-running civil conflict in Colombia has taken an estimated 220,000 lives since 1958, caused up to 5 million internally displaced people, and upwards of 150,000 civilians continue to flee their homes each year.