The two sides recently opened talks on fourth point, that of reparations for war victims, and began hearing testimony from those who have lost loved ones or been displaced by war 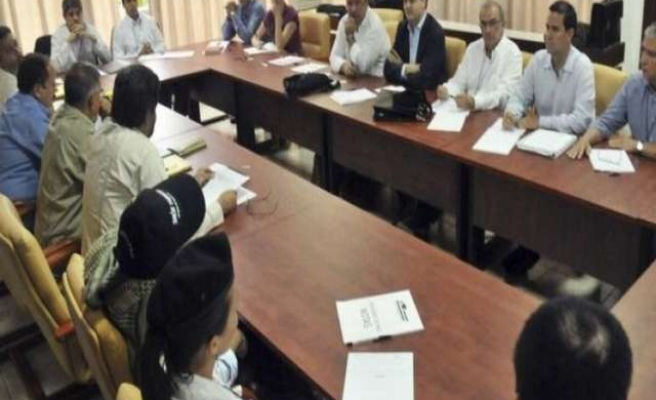 Colombian war victims demanded a bilateral ceasefire to halt Latin America's longest running conflict on Wednesday in a direct challenge to President Juan Manuel Santos, who has resisted rebel calls for a ceasefire during peace talks.

Victims from all sides in Colombia's 50-year-old war recently began addressing government and rebel negotiators in peace talks, which have been held in Cuba for nearly two years. In those 22 months, the armed forces and leftist guerrillas have engaged in periodic combat.

On Wednesday a group of 12 victims asked the Colombian military and leftist guerrillas of the Revolutionary Armed Forces of Colombia (FARC) to lay down their arms while continuing to talk.

The FARC has made several calls for a bilateral ceasefire during peace talks, but Santos has rejected them, citing a previous attempt at peace talks from 1999 to 2002 when the FARC used the ceasefire to rearm.

"As victims we demand ... a bilateral ceasefire to hostilities right away, with the objective of preventing the further victimization of the Colombian people," 12 of the victims said in a statement.

The FARC has declared a number of temporary unilateral ceasefires, for example during the run-up to elections this year. So far the government has only agreed to starting talks on a ceasefire that would take hold once the government and the rebels reach a comprehensive peace agreement.

"We demand a bilateral cease-fire because we really don't want any more victims in Colombia," said Reinel Barbosa, 28, who walks with a limp due to permanent damage to his right foot from an antipersonnel mine. "It's the suffering of the civilian population that we want to avoid."

The two sides recently opened talks on fourth point, that of reparations for war victims, and began hearing testimony from those who have lost loved ones or been displaced by a war that has killed more than 200,000 people since 1964.

The group of 12 currently in Havana represents victims of the rebels, government forces and right-wing paramilitary groups. They include people who have been kidnapped or raped and relatives of people killed or disappeared.

All but one appeared before reporters to read their joint statement. A 26-year-old woman who was forced to joint the FARC at age 13 declined to appear before the cameras.

A previous group of 12 addressed the peace talks last month. In all 60 victims will be heard. They were chosen by the United Nations, the National University of Colombia and the Colombian Conference of Bishops.