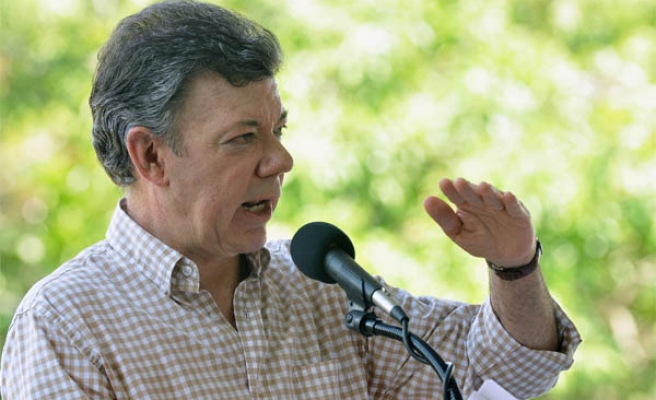 Colombian President Juan Manuel Santos announced Sunday that he would donate his $925,000 in Nobel Peace Prize money to victims of the conflict that has roiled his country for half a century.

Accompanied by his wife and children, as well as several members of his cabinet, the winner of this year's Nobel Peace Prize for his efforts to broker a peace deal with the Revolutionary Armed Forces of Colombia (FARC) said the funds would go toward "projects, foundations or programs that deal with victims and reconciliation."

The Colombia leader was speaking after a religious ceremony to dozens of victims of the armed conflict, where 79 people were killed in 2002 when FARC fighters threw an explosive device at a church where villagers were sheltering from fighting between guerrillas and paramilitary forces.

Under the peace deal, the FARC was to relaunch as a political party. But rightwing hardliners led a campaign against the accord, arguing it offered the rebels impunity for massacres, kidnappings and other crimes committed during the conflict.

In a referendum vote a week ago, Colombian voters narrowly defeated the peace deal.

The Nobel Peace Prize is a gold medal, a diploma and a check for eight million Swedish kronor (around $925,000), which will be presented at a ceremony in Oslo on December 10.