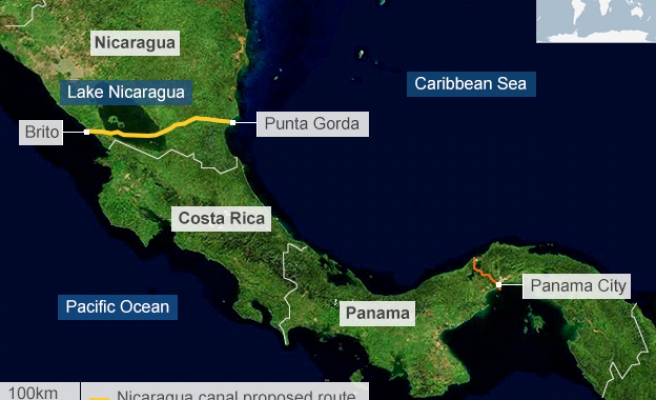 Construction of Nicaragua's $50 billion Interoceanic Grand Canal, expected to rival the Panama Canal, will begin Dec. 22 after feasibility studies have been approved, the committee overseeing the project said on Thursday.

The route suggested for the 172-mile (278-km) canal, which would be longer, deeper and wider than the Panama Canal, was approved in July. Construction will be led by Hong Kong-based HK Nicaragua Canal Development Investment Co Ltd (HKND Group).

Opponents of the plan are concerned about the canal's effect on Lake Nicaragua, an important fresh water source for the country, as well as the impact on poorer communities.

Committee member Telemaco Talavera said the feasibility studies were expected to be approved next month. The plan is to finish the canal within five years, with it becoming operational around 2020.

Officials said some small adjustments were being made to the overall project, including dredging stretches of a lake rather than using underwater explosives.

Bill Wild, HKND Group's chief project adviser, said more than 1 million cubic meters of earth will be dug up in the first year of work.

"This is a massive project, nobody can imagine how large and challenging a project it is, and it will possibly end up being the largest movement of earth that has ever been undertaken in the world, so it will be a massive challenge," said Wild.

He added that the work beginning in December will include building access routes to the project, installations for 50,000 workers and the construction of a temporary port on the Pacific coast.

Chinese businessman Wang Jing is behind the canal plan, though he has no prior experience developing or financing big infrastructure projects like the planned canal.

Wang only established Hong Kong Nicaragua Canal Development Investment Co (HKND) in August 2012, prompting some to question whether the project was viable.