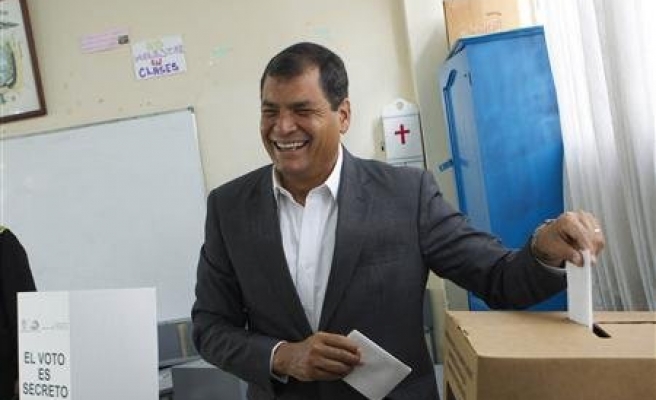 Ecuador's opposition won control of the capital Quito and another major city in the oil-producing Andean nation in elections on Sunday, preliminary results showed, a result President Rafael Correa said threatened to make the country harder to govern.

Opposition candidates won elections to run the local governments of Quito and industrial city Cuenca, and maintained control of the economic capital and port city of Guayaquil in an unsettling result for the government.

"Quito is an important setback for the Citizen's Revolution because it is important for stability," said Correa, speaking to reporters at the offices of his Alianza Pais or Country Alliance party, referring to his socialist political project.

Correa said the loss of Quito could make the country "ungovernable" and accused associates of the winner, Mauricio Rodas, of links with the "fascist right" wing in Venezuela, saying they were "counting the days for the government to fall".

Venezuela has been shaken by a fortnight of violent opposition protests over inflation, crime and economic shortages that its socialist President Nicolas Maduro has blamed on "fascists" seeking a coup with the backing of the United States.

But analysts say the defeat reflects dissatisfaction among the electorate over the Correa administration's perceived interference in local government and harsh criticism of opponents during the campaign, and may force him to adopt a more conciliatory style.

"What's needed now is the luck of a tight-rope walker, on a cable stretched from one mountain to another and (Correa) trying to find an equilibrium for the good of Ecuador," said political analyst Patricia de la Torre.

Ecuador is the smallest member of the OPEC group of oil producing nations, with output averaging 520,000 barrels per day in January.

Mauricio Rodas, 38, a former presidential candidate and lawyer, was elected mayor of Quito with 58.9 percent of votes and Jaime Nebot secured re-election in Guayaquil with 63.75 percent, according to the National Electoral Council, with 96 percent of votes counted by Monday afternoon.

In the industrial city of Cuenca, Mauricio Cabrera had won 44.4 percent of votes, it said.

Correa said his movement had won the majority of city halls in the provinces but appeared to acknowledge the losses in the three biggest cities as a rebuke by the electorate.

"The biggest mistake we can make is believing that everything is won. It's good that they gave us this shake-up so that it is known that nothing is yet irreversible and this is the revolution's big challenge," said Correa, who had appeared prominently in the campaign to support his party's candidates.

But that failed to ensure re-election for outgoing Quito mayor Barrero whose management of the city steadily lost him popularity.

The elections were disputed by 5,651 candidates for the posts of prefect or governor, mayor or council member.

Correa had warned in the run-up to the elections that defeat in the capital city could tempt opposition leaders to use their power to destabilize the country, a "tactic" he said was behind the protests in Venezuela.

Opposition victors dismissed the idea. Incoming Quito mayor Rodas said he would focus on working for the good of the city. Guayaquil victor Nebot, who has frequently clashed with Correa over projects, in turn warned Correa to avoid meddling in local government.