Ecuador's President Rafael Correa criticized the Swedish government for declining an offer by Ecuador to make Assange available for questioning inside the embassy. He also said he doubted the seriousness of his alleged crimes. 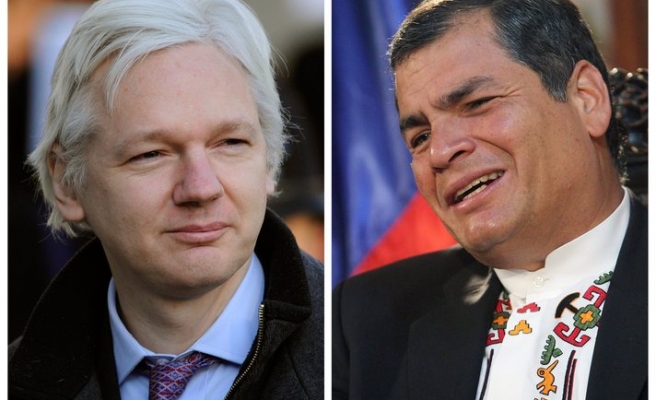 Ecuador's President Rafael Correa said on Wednesday that Britain's failure to extradite former Chilean dictator Augusto Pinochet more than a decade ago means it has no right to lecture others over the fate of WikiLeaks founder Julian Assange.

Correa has granted asylum to Assange, who has been holed up in Ecuador's embassy in London for more than two months seeking to avoid extradition to Sweden for questioning about rape and sexual assault allegations.

The South American nation's socialist leader says he shares the former computer hacker's fears that he could be sent from Sweden to the United States to face charges over WikiLeak's publication in 2010 of thousands of secret U.S. cables.

U.S. and European government sources say that the United States has issued no criminal charges against Assange and that Washington has launched no attempt to extradite him.

Britain says it is determined to fulfill a legal obligation to send Assange to Sweden. But Correa said London had made its own rules in the past -- specifically, by not extraditing Pinochet, who was charged with multiple human rights violations.

"Pinochet was not extradited for humanitarian reasons, when there were dozens of Europeans and thousands of Latin Americans who were murdered, and tens of thousands of people were tortured during the Pinochet dictatorship," he told reporters in Quito.

Pinochet was arrested by British police at a hospital in London in 1998 after Spain demanded his extradition for alleged torture and murder, including of Spanish citizens, during his 1973-1990 rule.

The British government decided in 2000 that the frail Pinochet was unfit to stand trial and free to fly home. He died six years later in Santiago, Chile, aged 91.

"If Pinochet was not extradited for humanitarian reasons then it's clear that they can take the decision not to extradite Mr. Julian Assange," Correa said.

"WE DON'T BOW TO PRESSURE"

Correa is part of a leftist alliance of Latin American leaders that includes Venezuela's Hugo Chavez and Bolivia's Evo Morales. They frequently criticize the U.S. "empire".

The Ecuadorean government remains angry at a veiled threat by Britain to enter its embassy and arrest Assange. On Tuesday Correa denounced it as "rude, impertinent and unacceptable."

But on Wednesday he repeated that Ecuador was ready to negotiate over the 41-year-old Australian's fate. Ecuador's government wants Assange to receive written assurances that he would not be extradited from Sweden to a third country.

But he criticized the Swedish government for declining an offer by Ecuador to make Assange available for questioning inside the embassy. He also said he doubted the seriousness of his alleged crimes.

"The alleged sexual offences are not considered crimes in Latin America, or in 95 percent of the world," Correa said.

The U.S.-trained economist seldom shies away from a fight, be it with the Roman Catholic Church, international bondholders or media bosses, whom he says are corrupt and manipulative.

He has won broad support for his position on Assange from other South American governments, framing the embassy saga as a struggle between his small country and "imperialist" powers.

"We cannot ignore the fact that some countries have a lot of weight," Correa said. "But something has changed: Latin America no longer has patrons. We don't bow to pressure. We will not accept neo-colonialism, wherever it may come from."