Correa is already very popular and appears to be drawing more support with his stance on Assange. 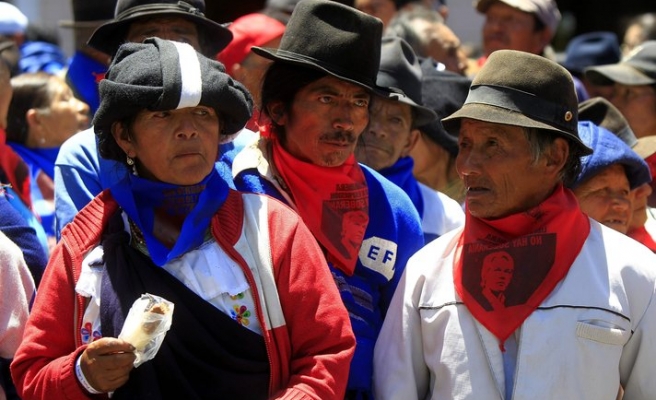 Hundreds of Ecuadoreans marched on Monday in support of the government's decision to grant asylum to WikiLeaks founder Julian Assange in a saga that could help President Rafael Correa win re-election.

Ecuador is outraged at Britain for threatening to raid its embassy in London where the Australian anti-secrecy campaigner -- faced with extradition to Sweden for questioning over rape and sexual assault accusations -- has taken refuge.

There is also a wider power game at play between Ecuador and the bloc of left-wing Latin American governments it belongs to, and the United States.

Correa supports Assange's claim that he is at risk of being sent to the United States for punishment over WikiLeaks' 2010 release of a deluge of U.S. diplomatic cables and secret army documents.

"We're here to support the timely and correct decision to grant asylum to Julian Assange and also to reject the hostile reaction of Great Britain in cahoots with United States," said Betty Wanda, a 28-year-old lawyer, among a crowd outside the presidential palace in Quito on Monday.

Correa is already very popular and appears to be drawing more support with his stance on Assange. He has portrayed the standoff with London as a principled struggle between a small nation against a "colonial power".

In power since 2007, and widely praised for high spending on roads, hospitals and schools, the 49-year-old Correa is expected to run for re-election in February 2013.

There have been small protests outside the British Embassy in the Andean nation's highland capital, and graffiti has sprung up showing support for Correa.

Ecuador might take the case to the International Court of Justice, but would first try to convince London that it should allow Assange to travel to the South American country or give him guarantees he would not be extradited to the United States.

"We're states with responsible governments that can negotiate directly about this problem. We have always been open to negotiations with the British and Swedish governments," Correa told state-run television on Monday night.

Correa's government, however, says there have been no talks since Aug. 15.

The ALBA bloc of left-wing Latin American governments, founded in 2004 by Venezuelan President Hugo Chavez and Cuba's then-leader Fidel Castro, and the UNASUR group of South American nations have both given Ecuador strong backing in the dispute over Assange.

Correa is a feisty leader who never shies away from a fight, be it with international bondholders, oil companies, local bankers, the Catholic Church or media organizations that criticize his policies.

He has been widely criticized for his hostility toward Ecuadorean media, but he says they are controlled by big business and are intent on weakening his government. Supporters say the decision to grant asylum to Assange demonstrates Correa's support for free expression.

Many at the rally on Monday wore multi-color bandannas with images of Assange and the message: "Without real freedom of expression, there will not be sovereignty."

State-run media have for weeks run stories portraying Assange as a champion of media freedom.