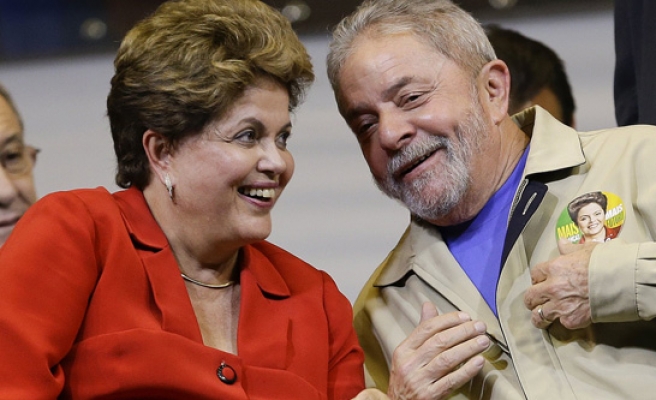 Brazilian President Dilma Rousseff named her predecessor Luiz Inacio Lula da Silva her chief of staff Wednesday, sparing him possible arrest for corruption and betting on his political prowess to save her from a spiraling crisis.

The two leftists who have led Brazil for the past 13 years are both fighting for their political lives, and news they were teaming up again in the government deeply divided Brazil.

Allies call Lula the only man capable of saving Rousseff's embattled administration, but opponents condemn the fact that ministerial immunity will now protect him from prosecution in ordinary court.

Cabinet ministers can only be tried before the Supreme Court in Brazil.

The appointment is a risky bet for Rousseff, who is battling crises on multiple fronts: an impeachment attempt, a deep recession, mass protests and the fallout of an explosive corruption scandal at state oil giant Petrobras.

"Resign! Resign!" shouted several thousand protesters at the foot of a high rise housing FIESP, a powerful federation of Sao Paulo industries that was illuminated in green and yellow -- Brazil's national colors -- in addition to a large inscription that read "Impeach now."

Lula was hugely popular when he stepped down five years ago at the height of an economic boom. But he returns to Brasilia with heavy baggage: he has himself been charged with money laundering in a case linked to the Petrobras scandal.

The opposition was quick to slam the appointment.

"Instead of explaining himself and assuming his responsibilities, former president Lula preferred to flee out the back door," said lawmaker Antonio Imbassahy, lower house leader for opposition party PMDB.

"It's a confession of guilt and a slap to society. President Dilma, by appointing him, has become his accomplice," Imbassahy added. "The final chapter in this story will be her impeachment."

On social media networks, critics gleefully quoted Lula's own words as a rabble-rousing labor leader back to him: "In Brazil, when a poor person steals, he goes to prison. When a rich person steals, he becomes a cabinet minister!"

Rousseff fired back at the criticism in a press conference.

"Lula's arrival in my government strengthens it and there are people who don't want it to be stronger," she said.

She played up Lula's political acumen and said she would give him "the necessary powers... to help Brazil."

Other opponents warned Lula would be the country's de facto leader.

"The ex-president is launching... his third term and the president is ending her second," said Green Party Senator Alvaro Dias.

Lula, the 70-year-old co-founder of the ruling Workers' Party (PT), left office with 80 percent popularity ratings and the status of a hero to the left.

During his two terms, he presided over a watershed period of prosperity and social programs that helped lift tens of millions out of Brazilians poverty.

But his legacy is now threatened by charges that he accepted a luxury apartment as a bribe from a company implicated in the Petrobras scandal.

At a deeper level, he faces suspicion among many Brazilians that his entire administration was underpinned by graft.

Lula vigorously denies involvement in the scandal, in which investigators say construction companies conspired with Petrobras execs to overbill the oil giant to the tune of $2 billion, paying huge bribes to politicians and parties along the way.

Still, he may be Rousseff's best hope. Lula has far greater charisma than Rousseff, and the political instinct for forging alliances and holding them together.

"No one else in the PT has the force of Lula," said political analyst Michael Mohallem of the Getulio Vargas Foundation.

Rousseff chaired Petrobras during much of the period under investigation, but does not face charges so far.

The anti-corruption probe now appears to have the president squarely in its sights, though.

In a plea deal published Tuesday, a senator arrested in the case accused Rousseff of trying to buy his silence.

The senator, Delcidio Amaral of the Workers' Party, told investigators that Rousseff contacted him via intermediaries to urge him not to testify.

The president angrily denied the accusation.

Prosecutors have used plea bargains throughout the investigation to implicate a steadily expanding Who's Who of politicians and business executives in the spiraling scandal.

The impeachment push against Rousseff is not directly related to the corruption scandal, but has advanced in tandem with it, deepening the crisis engulfing her administration.