﻿Police announced the capture of a FARC guerrilla responsible for recruiting 80 percent of all minors into the group in one region. 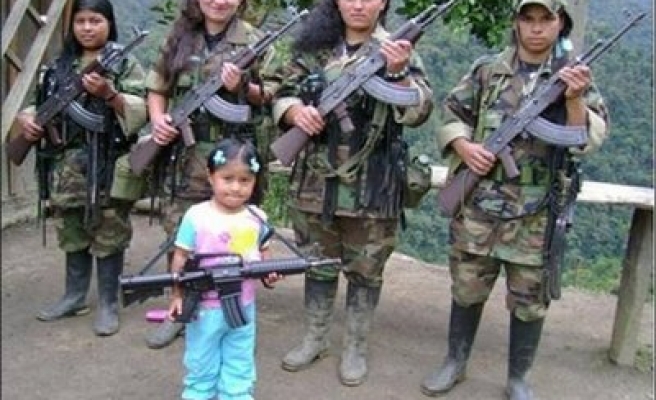 Police confirmed Thursday the capture of a FARC member responsible for recruiting minors into the rank and file of the Colombian guerrilla group.

According to authorities, Miguel Angel Villamizar Contreras, 28, who uses the alias “Reyes,” has been an active member of the Revolutionary Armed Forces of Colombia (FARC guerrillas) for 17 years and is responsible for 80 percent of all recruitment of minors into the FARC in the areas of Santander, Antioquia and Bolivar.

“This capture not only has far reaching effects on the FARC’s 24th Front and the Magdalena Medio division but also for children, because this man had become the most prolific recruiter of minors in the region, tricking parents and children into joining up and training them with weapons so they could become FARC rebels. This capture is important and his actions cannot be justified,” said Colombian Minister of Defense Juan Carlos Pinzon in a press conference.

Children have long been caught in the long-running Colombian conflict and a study conducted by the Colombian Attorney General’s Office show that between 1992 and 2012, the FARC pursued an active policy of recruiting minors. During this period, records show that an estimated 3,000 minors were either freed from the guerrilla group by state forces or had escaped. Girls made up 31 percent of these minors who left the guerrillas.

“Over a period of three months the victims were subjected to harsh physical training and courses about how to use weaponry. These trainings were conducted by alias “Reyes” and this has been proved by various videos which were captured in a military assault in March on a FARC base,” said Pinzon.

Contreras would reportedly trick parents of humble backgrounds and scant economic resources into allowing him to take their children away for training with the promise of substantial financial benefits. He was captured in the town of Yondo close to the industrial city of Barrancabermeja, approx. 260 miles from the capital Bogota.

The issue of the recruitment of minors into the guerrillas has been one of the major obstacles during the on-going peace dialogues in Havana between the FARC and the government’s negotiating team. The International Criminal Court in The Hague has been particularly interested that this practice be stopped.

While members of the FARC secretariat involved in peace dialogues in Cuba have failed to comment on Reyes’ capture, the report released by the Attorney General’s Office shows that the FARC is responsible for recruiting the most children in Colombia, far ahead of the smaller National Liberation Army (ELN) and the newly emerged armed groups (Bacrims) which formed out of the demobilization of right-wing paramilitaries.

“The Colombian government and the international community need to send a strong message that the rights of children must be respected. Cases in which adults commit human rights violations and steal the lives of children need to be prosecuted. It is very difficult for a child who lived such atrocities to rebuild a healthy and productive life,” said Paula Delgado-Kling to Anadolu Agency. Since 2001, Delgado-Kling has been in the process of writing “Stolen Lives,” that follow the lives of two former FARC child soldiers.

“Years of therapy will not erase such horrors. Now, especially now that Colombia is thinking of a post-conflict era, victims need to know that their lives and their feelings will be validated,” she said.

According to Human Rights Watch, the Colombian conflict has killed an estimated 220,000 people and displaced more than 5 million since 1958. The peace dialogues began in November 2012 and have addressed various topics such as the recruitment of minors, political participation, agrarian reform and the production of illegal drugs. Currently, negotiations are on the subject of the victims of the armed conflict.