Guatemalan emergency workers temporarily suspended their search for victims of a massive landslide due to darkness. 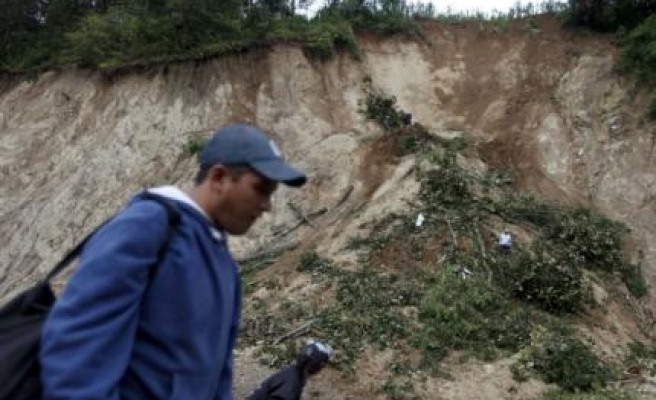 Guatemalan emergency workers temporarily suspended their search for victims of a massive landslide on Monday due to darkness.

The landslide buried a crowd of people on a highway amid heavy rains that pummeled Guatemala over the weekend.

The rains triggered multiple mudslides on several major roads, killing at least 45 people, including three whose bodies were found on Monday.

Another 15 people are still officially missing.

Fire officials in Guatemala City said the bodies of 25 people had been recovered from the largest landslide, on one of the country's main highways in the Cumbre de Alaska region northwest of the capital.

The majority of the victims were young men buried in a landslide after rushing to help people trapped in a bus.

Emergency services suspended the search on Monday night due to darkness and fears that more rain could trigger fresh landslides.

"The hillsides are very unstable, saturated with water and really it's a dangerous area. There are landslides everywhere, on all the major routes in the country," President Alvaro Colom said on local radio.

"People are waiting for the recovery of the bodies of their friends, family, fathers, sons. Really it has been a tragic weekend for the country."

In the village of Nahuala, approximately 105 miles (170 km) northwest of the capital, indigenous Maya people mourned eight victims of another of the weekend's worst slides.

The torrential rains have also affected southern Mexico, where a quarter of a million people have fled their homes due to flooding in one of the worst-ever recorded rainy seasons in the region.

Eight people have died in Oaxaca state over the last 10 days due to the flooding. according to emergency officials.