While sacrificing Lamothe to appease his critics, Martelly praised his hard work, adding Lamothe had agreed to step down. 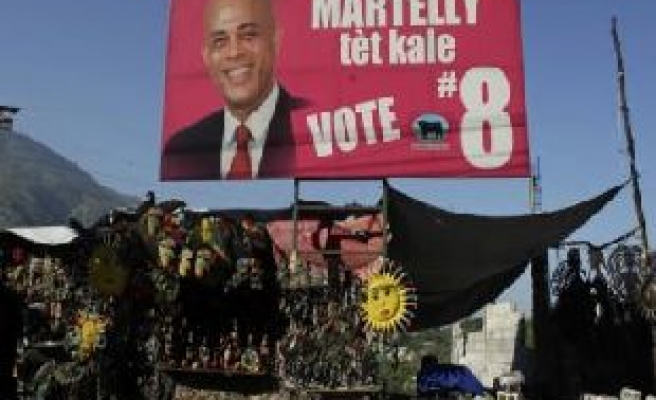 Haitian president Michel Martelly agreed to seek the resignation of his prime minister on Friday, after accepting the recommendations of a special commission appointed to resolve a long-running political dispute that has blocked elections.

Martelly made the announcement in a national address from the presidential palace, his second in three days, after talks with a special envoy from the U.S. State Department, as well as mounting street protests complaining about the lack of elections and government corruption.

It was not clear when the recommendations would take effect, or when a new prime minister would be sworn in, but it appeared to mark the end of a close alliance between Martelly and Prime Minister Laurent Lamothe, who are friends and business partners.

While sacrificing Lamothe to appease his critics, Martelly praised his hard work, adding Lamothe had agreed to step down.

"He is willing to make that sacrifice," Martelly said, with Lamothe seated in the audience.

"I recognize his determination to help the country," he added.

Lamothe, who attended university in Miami, is highly regarded by the international community, including the major international lending banks, and is expected to run for president next year.

Other recommendations to break the political deadlock include the resignation of the head of the Supreme Court and the interim electoral council, as well as the release of "political prisoners".

Haiti has a long history of convulsive elections and is still recovering from an earthquake five years ago that leveled much of the capital, Port-au-Prince.

Martelly said he hoped the commission's recommendations would reunite Haiti, adding that he would discuss their implementation with officials next week.

International pressure has been mounting on Martelly, after a series of street protests, including another on Friday.

Legislative and municipal elections have been held up by a dispute between the government and a group of opposition senators over details of a proposed electoral law.

The parliament will shut down due to a lack of elected members if elections are not held before Jan. 12.

Opposition leaders have accused Martelly, a popular singer known as "Sweet Mickey", of scheming to rule by decree during the final year of his term in order to manipulate presidential elections late next year. They say the government has not seriously engaged the opposition or offered reasonable concessions.

For its part, the government has accused the opposition of trying to sabotage democratic rule.