Brazilian native Indians protested at the construction site of a hydroelectric plant in the southern Amazon region. 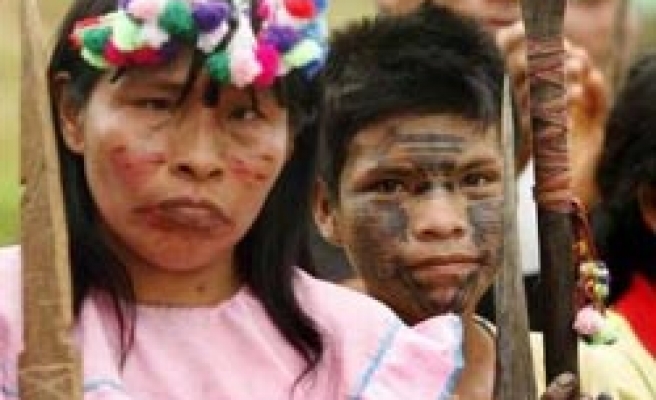 Brazilian native Indians on Sunday protested at the construction site of a hydroelectric plant in the southern Amazon region, blocking around 100 workers to leave, local media reported.

As many as 400 Indians from several different tribes say power plant was built on an ancient burial site.

The protesters have demanded $5.6 million in compensation for cultural and social losses and a tract of hunting grounds.

"They didn't take into account the situation of the Indians. The company used dynamite to blow up part of an archeological site," Antonio Carlos Ferreira de Aquino, a local administrator with the government's agency of indigenous affairs, Funai, told Folha.com.

The Indians are demanding that government officials help negotiate a settlement with the construction company.

"We want to be compensated for the construction of the plant. The site is 30 kilometers (19 miles) from our reserve and has caused great cultural and social impact in our community, not to mention environmental damage," Aldeci Arara, a tribal leader, told the G1 news portal.

The Dardanelos dam on the Aripuana river, some 400 kilometers (250 miles) north of the Mato Grosso state capital Cuiaba, was due to come online in January 2011, the media reports said.

It is one of nearly a dozen hydroelectric power plants the administration of President Luiz Inacio Lula da Silva has been promoting in the Amazon region.