The U.S. National Hurricane Center downgraded Karl to a tropical storm from a hurricane as it pounded southern Mexico with heavy rains. 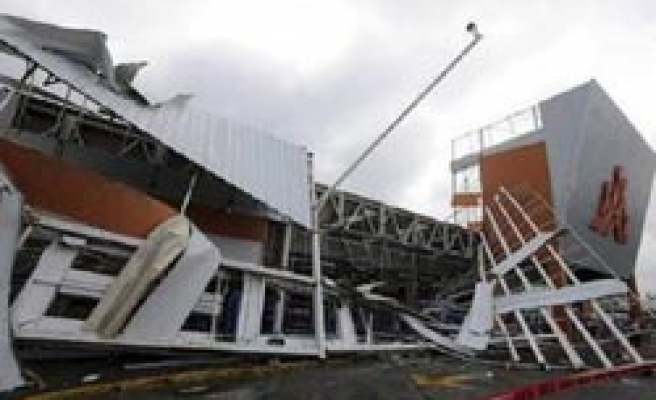 Hurricane Karl hit Mexico's central Gulf Coast on Friday, killing two people in a mudslide, and weakened quickly to a tropical depression as it moved inland.

The storm appeared to have spared Mexican oil operations from major damage after sweeping through the Bay of Campeche, where Mexico produces more than two-thirds of its 2.55 million barrels per day of crude output.

Karl made landfall on Friday morning about 10 miles north of the port city of Veracruz, flooding roads and knocking down dozens of trees.

The storm, which weakened from a Category 3 hurricane to a tropical depression as it moved inland, was blowing sustained winds of up to 35 miles per hour, the U.S. National Hurricane Center said.

Part of a rain-soaked mountain collapsed on a house in the inland state of Puebla, killing a woman and a child, state authorities said.

Karl was seen dissipating overnight, but state governments across southern Mexico said they feared the storm could still trigger more mudslides and flooding over the weekend.

Earlier in the day, light poles buckled and power went out in part of Veracruz. Before the center of the storm hit the coast, fishermen rushed to secure their small vessels.

"What a fright. I have never seen anything like this," said Ester Garza, a mother of three from central Mexico who was vacationing in the city of Veracruz, where people walking against the wind were unable to advance during heavy gusts.

More than 1,000 people had huddled in shelters along the coast, a Veracruz state civil protection official told W Radio. Operations were suspended at Mexico's only nuclear power plant, which was in Karl's path, officials said.

Mexican authorities are experienced at evacuating people caught in the path of hurricanes and death tolls caused by hurricanes hitting Mexico are usually low.

Mexico's state oil monopoly Pemex said it had closed down 14 minor wells and evacuated platforms in the Gulf, but the storm seemed to inflict no lasting damage to its operations. It did not say if the wells produced oil or natural gas.

Karl could soak swaths of southern Mexico with as much as 10 inches of rain, with more falling in interior mountain towns in coffee-producing Veracruz state.

Mexico's oil industry had to scramble on Thursday after Karl came across the Yucatan Peninsula into the Bay of Campeche. Two of Mexico's main oil exporting ports closed as Karl passed. They reopened on Friday.

Karl is just one storm that has formed in the Atlantic this hurricane season. Hurricane Igor, a Category 2 storm, swirled with sustained winds of close to 110 mph on a course that could take it to Bermuda by Sunday.

"Some strengthening is possible on Saturday and Igor could become a major hurricane again," the U.S. National Hurricane Center said.

Any hurricane with top sustained winds of more than 110 mph is considered major and capable of causing devastating damage.

Julia, located far east of Igor and posing no immediate threat to land, was downgraded to a tropical storm from a hurricane.

Bermuda residents stocked up on supplies and secured their homes. The rocky island, a tiny British overseas territory that is a hub for the global insurance industry, is one of the world's most isolated yet densely populated islands.

The Bermuda government's emergency agency warned residents to prepare for a similar impact from Igor as the island experienced from the 2003 Hurricane Fabian, which killed four people and caused millions of dollars of damage.

Loading shopping bags onto his moped in downtown Hamilton, Matthew Lewis said he would board up the windows of his hillside home and remove any items from his garden that could become projectiles in hurricane-force wind.

"When you see a storm that large, you do tend to get a bit daunted, to say the least, because we've got nowhere to run to. So yeah, it does get a little bit scary," Lewis said.