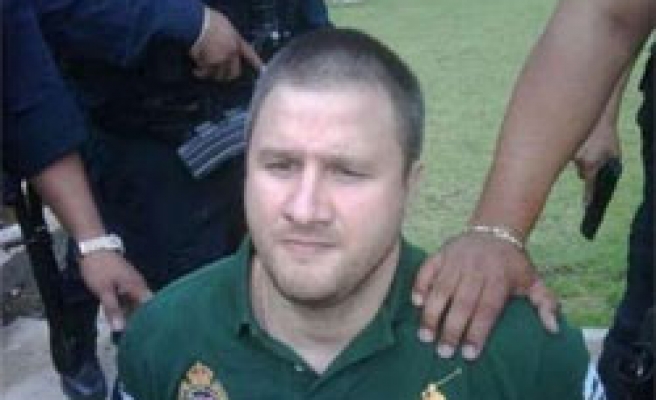 Federal police caught Valdez, a leader of the Beltran Leyva cartel based in central Mexico, in a residential area near Mexico City, the government said.

Nicknamed "La Barbie" for his blue eyes and fair complexion, he is believed to have been behind a surge in bloodshed in central Mexico as he vied for leadership of his gang.

His capture comes on the heels of the killing by Mexican soldiers of another drug boss, Ignacio "Nacho" Coronel. But nabbing Valdez may be an even bigger win for Mexico's embattled president if he is extradited to the United States, where he has a $2 million bounty on his head.

"This is clearly an important capture and will take some pressure off Calderon in the short term but the impact will only be partial unless the government moves to arrest La Barbie's hitmen and dismantles his gang," said Pedro de la Cruz, a security analyst at Mexico's National Autonomous University.

"Unfortunately for Calderon, his capture could provoke even more violence if the Sinaloa cartel, the Zetas and La Familia try to move into his territory, which is very likely."

Calderon is struggling to contain growing alarm in Mexico and abroad over his drug war. More than 28,000 people, mainly traffickers and police, have been killed amid vicious turf battles sparked by the army-led crackdown in the 3-1/2 years that the austere former lawyer has been in power.

Calderon has made it the central goal of his presidency to crush the powerful cartels that bring in an estimated $40 billion a year. But the bloodshed, including the torture and butchering of captives by rival gangs, has overshadowed much of Calderon's successes.

Authorities said on Monday that nearly 10 percent of the federal police force had been fired as Calderon seeks to rein in the cartels and curb widespread corruption among Mexican officers.

Recent drug-related violence has included the killing of 72 people, thought to be migrant workers, near the northeastern U.S. border, the murder of a candidate for governor in the same region and slayings of groups of people at rehabilitation centers and parties.

Drug hitmen have also deployed small car bombs for the first time in recent weeks, targeted mayors and stepped up their intimidation of media.

Valdez has been a top contender to lead the Beltran Leyva cartel since soldiers killed its former boss, Arturo Beltran Leyva, in December 2009, triggering a power struggle within his organization.

Valdez was once close to top drug fugitive Joaquin "Shorty" Guzman, head of the Sinaloa alliance based in northwest Mexico, after growing up selling marijuana in the United States and developing a taste for luxury cars, nightclubs and designer clothes. Guzman is also a former ally of the Beltran Leyva brothers but the two gangs are now bitter rivals.

"It's a good score for the government but it's also good news for the Sinaloa cartel," Mexican drug trade expert and columnist Jose Reveles said of Valdez's arrest.