Authorities have arrested one of Mexico's most wanted men, alleged drug trafficker Sergio Villarreal, who is said to work for the Beltran Leyva cartel. 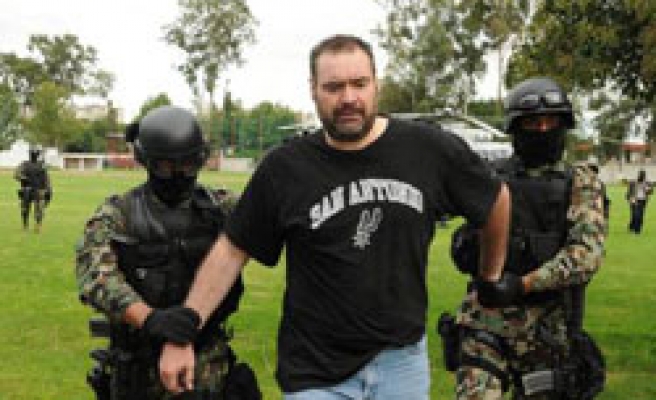 Authorities have arrested one of Mexico's most wanted men, alleged drug trafficker Sergio Villarreal, who is said to work for the Beltran Leyva cartel.

Sergio Villarreal, dubbed "El Grande," was a leading member of the Beltran Leyva cartel and did not resist capture when dozens of marines using armored vehicles cornered him at a safe house in the central Mexican city of Puebla, a marine official told Reuters.

"The capture of Sergio Villarreal ... is another of the federal government's continuing strikes against a highly dangerous criminal organization which is today badly weakened," national security spokesman, Alejandro Poire, said during a news conference on Sunday night.

Suspected drug hitmen killed 25 people late last week in the U.S.-Mexico border city of Ciudad Juarez in what was the bloodiest day in almost three years for a major manufacturing hub gripped by an escalating drug war.

A separate operation by the federal police in the northern state of Tamaulipas on Saturday led to the discovery of a weapons cache that included dozens of guns and 90 grenades, authorities said on Sunday evening.