Mexico finds 72 bodies 'linked to drug cartel' in US border

Mexican marines found 72 corpses at a remote ranch near the U.S. border, the Mexican navy said. 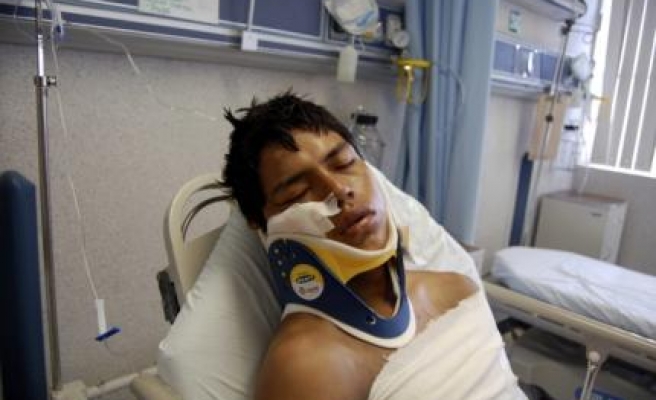 Mexican marines found 72 corpses at a remote ranch near the U.S. border, the Mexican navy said on Wednesday, the biggest single discovery of its kind in Mexico's increasingly bloody drug war.

The marines came across the bodies of 58 men and 14 women, thought to be migrant workers, on Tuesday at the ranch in Tamaulipas state, 90 miles (150 km) from the Texas border, after a series of firefights with drug gang members.

Three gunmen and a marine died in the firefights, while another suspected gang member was arrested and several others escaped, a navy spokesman said.

"The bodies were dumped about the ranch and were not buried. We are still investigating how long they had been there," the spokesman said. He declined to give more details.

Marines guarding a nearby checkpoint reached the ranch after a wounded man who escaped approached them on Monday and gave them information leading to the area, which troops located from the air, the navy said.

The soldiers came under fire as they neared the ranch. Marines seized assault rifles, bullets, uniforms and vehicles -- including one with forged army license plates.

Senior national security official Alejandro Poire told a news conference that those killed could be illegal immigrants from countries including Ecuador, Honduras, El Salvador and Brazil who had been kidnapped by drug gangs as they made their way to the Texan border.

He cited testimony from the wounded man, an Ecuadorean now in a hospital in northern Mexico.

Mexican cartels have moved into human smuggling in recent years, sometimes kidnapping migrants, extorting them and forcing them to carry narcotics across the border. Some are also forced to work as hitmen, Poire said.

In May, authorities discovered 55 bodies in western Guerrero state and 51 bodies on the outskirts of Monterrey near Texas in July.

President Felipe Calderon, who deployed tens of thousands of soldiers to fight cartels when he took office in December 2006, has been seeking to shore up support from opposition politicians and civic leaders as the war on drugs grows more gruesome.

"Yesterday's crime, for example, shows (cartels') beastliness, their brutality and their absolute lack of human scruples," he told local radio in an apparent reference to the Tamaulipas event. "I am sure we will still see a phase of very intense violence, principally among cartels," Calderon said.

Tamaulipas has become the scene of some of Mexico's bloodiest drug violence since the start of the year, as rivals from the Gulf cartel and a spinoff group, the Zetas, fight over smuggling routes into the United States.

More than 28,000 people in Mexico have died in drug violence since Calderon began his drug fight in late 2006, fueling worries violence could begin to take a major toll on Mexicans who are unrelated to the drug trade and even undermine a recovery for Latin America's second largest economy.

Calderon has blamed much of the recent bloodshed on the split between the Zetas, who take their name from a Mexican police code for high-ranking officers, and the Gulf gang. Authorities in Nuevo Leon state said the Zetas were responsible for abducting and killing a mayor near Monterrey last week.

Armed with a huge arsenal of grenades, automatic weapons, dynamite and even rocket launchers, the two gangs are each battling other cartels from the Pacific state of Sinaloa.

The Zetas were members of Mexico's elite special forces trained to fight drug cartels, but they switched sides in the 1990s and became one of the country's most feared gangs led by Heriberto Lazcano, known as "The Executioner."