Oscar Garcia Montoya, the alleged leader of the "Mano con Ojos" or "Hand with Eyes" organization, was arrested by police in the central state of Mexico, which surrounds the sprawling Mexican capital, prosecutors said. 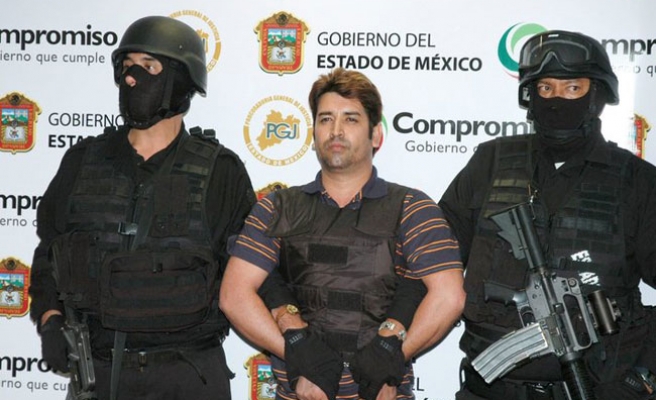 The alleged leader of an extremely violent breakaway Mexican drug cartel who ordered the shootings and beheadings of 600 people has been arrested, authorities said on Thursday.

Oscar Garcia Montoya, the alleged leader of the "Mano con Ojos" or "Hand with Eyes" organization, was arrested by police in the central state of Mexico, which surrounds the sprawling Mexican capital, prosecutors said.

The gang spread terror by dumping severed heads in the streets of towns surrounding Mexico City. It broke away from the powerful Beltran Leyva drug cartel, which operated in central and northeast Mexico.

Alfredo Castillo, the prosecutor for the state of Mexico, said Garcia was a former corporal in the Mexican Marines and a one-time police officer in northern Mexico, who personally murdered hundreds of rivals.

"He has admitted to taking part personally in 300 executions, and ordering another 300," Castillo told a news conference.

More than 42,000 people have been killed in raging drug violence since President Felipe Calderon took office in 2006 and sent the military to crush cartels.

The crackdown has led to the spin off of numerous smaller cartels, which are often characterized by their extreme violence as they fight to carve out turf.

News reports said the Hand with Eyes gang had been locked in a brutal battle with the Central Cartel to control territory in and around Mexico City.

Garcia allegedly worked closely with late cartel leader Arturo Beltran, who was killed in a gun battle with the Mexican Marines in December 2009, Castillo said.

He was trained to kill by former members of an elite Guatemalan commando unit dubbed the Kaibiles, whose famed brutality has made them sought-after recruits for Mexico's warring cartels.