The government said it had sent in 8,000 troops and federal police to reinforce security after looters made off with everything from beer to bicycles and plasma TVs from supermarkets 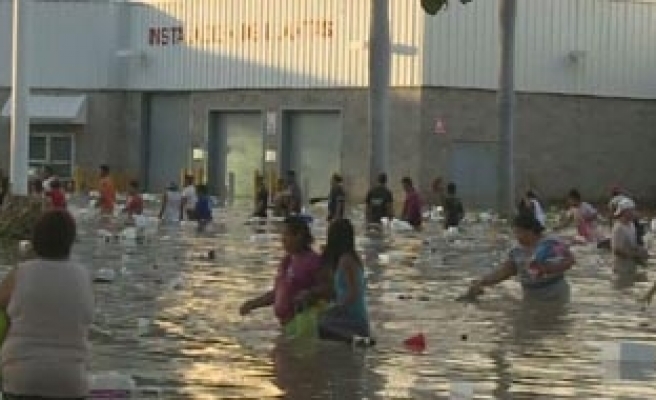 Mexico sent in troops and police to safeguard thousands of tourists stranded in the storm-battered Mexican Pacific resort of Los Cabos on Thursday after widespread looting.

Odile churned into the southern tip of the Baja California peninsula on Sunday as a Category 3 hurricane, wreaking havoc on a scenic area popular with U.S. sun seekers that has rarely witnessed such devastation.

Two people died after trying to cross a flooded stream in the area of Santa Rosalia, officials said.

However, the peninsula looked set to avoid a second hammering, as Hurricane Polo weakened to a tropical storm and the U.S. National Hurricane Center said it was on track to veer northwest out to sea.

By Thursday, some 18,000 tourists had been airlifted out of the area, Mexico's Ministry of Transport and Communications said. But thousands more remained trapped and bottled water was being rushed in with other emergency supplies.

The government said it had sent in 8,000 troops and federal police to reinforce security after looters made off with everything from beer to bicycles and plasma TVs from supermarkets in San Jose del Cabo and Cabo San Lucas.

The U.S. Embassy in Mexico City said it was working with U.S. and Mexican airlines to get U.S. tourists out of the area on special flights. It urged stranded tourists to head to the San Jose del Cabo airport, or the airport in La Paz, the capital of Baja California Sur state.

For those still trapped, the usually dry and pleasant resort region of Los Cabos had turned into a disaster zone.

The few shops that opened on Thursday were protected by people armed with bats and sticks. There was no money in ATMs and no telephone service.

In La Paz, hundreds of houses were damaged and local people ripped out drain pipes to access water.

"We don't have water for the toilet, to prepare food," said La Paz resident Isabel Aguirre. "We organized ourselves and came because we need to get water."

The Mexican government said it had sent 1,500 federal police officers to prevent looting in the area, where people walked through streets strewn with toppled electricity pylons.

"We're going to cover the streets, the neighborhoods, to give people security and so we don't see these types of unfortunate actions committed for which there is no justification," Interior Minister Miguel Angel Osorio Chong said on local television on Wednesday night.