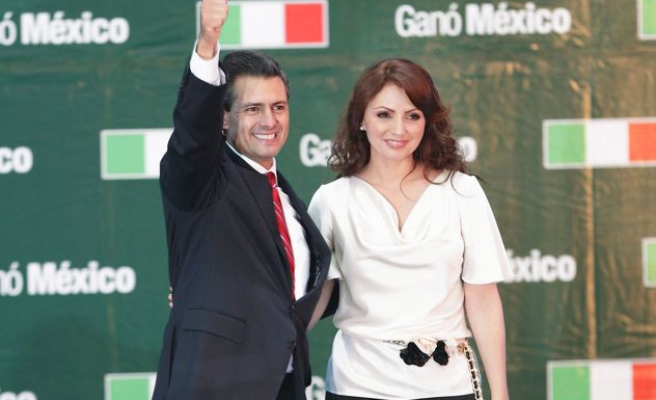 Mexico's old rulers claimed victory in a presidential election on Sunday, ending 12 years in opposition after a campaign dominated by a sputtering economy and rampant drug violence.

After pledging to restore order and ramp up economic growth, Enrique Pena Nieto of the Institutional Revolutionary Party (PRI) had a clear lead over his rivals in exit polls and a "quick count" conducted by electoral authorities.

Although his main rival said it was too early to concede defeat, the 45-year-old Pena Nieto delivered a late-night victory speech to cheering supporters, and a senior electoral official said the PRI candidate's lead was "irreversible".

"Mexicans have given our party another chance. We are going to honor it with results," a visibly moved Pena Nieto told followers packed inside the PRI headquarters in Mexico City.

Jubilant supporters waved banners sporting caricatures of their candidate and his trademark quiff, and confetti in the red, green and white of the Mexican flag - and the PRI's colors - rained down inside the hall.

Outgoing President Felipe Calderon congratulated Pena Nieto on his triumph, which completed a dramatic comeback for the PRI.

Having run Mexico as a virtual one-party state for most of the 20th century, it was ousted in an election 12 years ago and was seen by many as being on its death bed when it finished way back in third place in the 2006 presidential vote.

Renowned as much for his unfailingly well-groomed appearance as his political skills, the handsome Pena Nieto gave a fresh face to the PRI, helping to instill a new sense of discipline and make the party electable again.

He hopes to use economic reform as a springboard to ignite growth, create jobs and draw the heat out of a drug war that has killed over 55,000 people since late 2006.

He has pledged to boost economic growth to about 6 percent a year and make bold economic changes, including reforms to allow more private investment in Mexico's state-run oil industry.

The quick count showed Pena Nieto with around 38 percent of the vote with leftist candidate Andres Manuel Lopez Obrador in second place with le ss than 32 pe rcent.

That margin, however, was considerably smaller than most opinion polls had predicted, and it was far from clear that the PRI would win a majority in Congress.

Lopez Obrador could choose to challenge the election, as he did six years ago when he narrowly lost to Calderon and launched months of protests against alleged fraud.

He has said in recent weeks that this election campaign was also plagued with irregularities, raising concerns that he might again call his supporters onto the streets.

Josefina Vazquez Mota of the ruling National Action Party, or PAN, trailed with l ess than 26 p ercent of the vote in Sunday's election.

It was a humiliating defeat for conservative President Felipe Calderon's party, worn out after a dozen years in power.

Inspiring high hopes when it was elected in 2000, the party has failed to ignite stronger economic growth and Calderon has had no answer to the rampant violence of Mexico's drug war.

"Nothing has improved since the PAN got in," said Mexico City plumber Raimundo Salazar, 44. "The PRI understands how things work here. And it knows how to manage the drug gangs."

The telegenic Pena Nieto built his reputation as governor of the State of Mexico in 2005-2011, where he oversaw solid economic growth and brought down the state government's debt.

"He did a really good job ... building lots of hospitals, roads and schools," said Lino Posadas, 30, a parking attendant from the town of San Jose del Rincon in the state.

To his critics, the 45-year-old is a product created by Mexico's main television companies to serve as a proxy for the country's biggest businesses and the ruling elites in the PRI.

"He's been imposed on us by powerful interests like the TV stations and old presidents," said Javier Aguilar, a 62-year-old biochemist. "How can it be that a country this miserable is home to the world's richest man?" he said, referring to tycoon Carlos Slim.

The planned reforms were also pushed by the PAN under Calderon, only to be stalled by the PRI in Congress. Indeed, with its close ties to the oil workers' union, the PRI could prove a bigger obstacle to revamping Pemex than the PAN.

Created after the turmoil of the Mexican Revolution, the PRI laid the foundations for modern Mexico. It started out as a socialist party that nationalized the oil industry in the 1930s before drifting to the center to establish a corporatist model of rule.

But Mexicans tired of rampant corruption, rigged elections and heavy-handed rule under the PRI, and finally voted it out of power at the turn of the century.

The PAN took over under former Coca-Cola executive Vicente Fox, promising strong growth and more democratic government. But the economy underperformed its peers in Latin America for most of the 12-year rule by the PAN, which never had a majority in Congress and was unable to push through many reform plans.

When Calderon succeeded Fox in 2006, he deployed the army against warring drug gangs. Instead of quelling the violence, it soared to new heights and the relentless wave of beheadings and massacres turned even more voters away from the PAN.

Bit by bit, the PRI began to recover ground.

Despite its reputation for corruption, the PRI appeals to many voters as the only party with the experience needed to pacify the country and raise living standards.

Pena Nieto has vowed to stamp out the undemocratic excesses, misuse of public funds and shady acts of political patronage that tarnished the PRI's decades in power.

Yet as the head of a beast whose tentacles still extend into every aspect of Mexican life, he will have his work cut out keeping the PRI clean, even if he is not already compromised by the deals he had to make to win the support of party barons.

He will take over at a time when Mexico's finances are in good order and the economy is beginning to improve, although it still cannot generate enough work for the growing population.

Under the PAN, growth has averaged barely 2 percent a year. That has left hundreds of thousands of young Mexicans out of work and exposed them to the lure of quick, dangerous money in the pay of the drug gangs.

Wary of becoming bogged down in the same battle that exhausted Calderon, Pena Nieto has shied away from targeting the drug cartels, pledging instead to focus on reducing crime.

"The fight against crime will continue, yes, with a new strategy to reduce violence and above all protect the lives of all Mexicans," Pena Nieto said on Sunday night.

However, he dismissed accusations by opponents that the PRI might try to make agreements with drug cartels. "Let it be very clear: There will be no deal, no truce with organized crime."