Protesters marched in more than 200 cities across the world Thursday, including more than 40 U.S. cities. 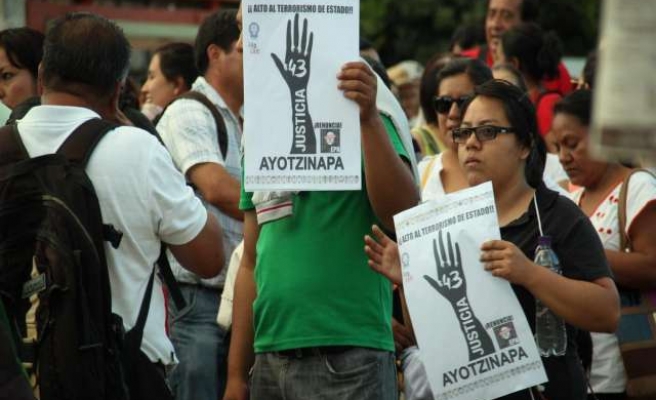 Protesters by the thousands once again took to the streets of the city here Thursday night to express their “displeasure” with the government and demand a transparent investigation into missing students.

It was the fourth massive march in Mexico City, almost two months after police opened fire on students during a protest in Iguala, in the southwestern state of Guerrero, resulting in six deaths and 43 missing students.

Thursday night’s demonstration was part of a larger movement that mobilized protesters in more than 200 cities across the country and the world, including in more than 40 cities of the United States.

“We want to show our disagreement with the undemocratic government and corrupt police officers,” said Aurora, a student from Justo Sierra University in Mexico City who did not want to give her last name. “We don’t even feel safe to walk and protest in the streets, but we have to do it because they are not only 43 missing persons. There are hundreds, they are thousands,” she said.

President Enrique Pena Nieto has been heavily criticized since the students disappeared Sept. 26 after clashing with local police in the town of Iguala, about 120 miles southwest of Mexico City. Critics charge that he has not done enough to find the students after campaigning on a platform that included reducing crime.

Protesters converged on the main square of the capital chanting, “Go away Pena!” in front of a giant light effigy of Emiliano Zapata, Mexico’s national revolution hero. They then burned an effigy of Pena Nieto and demanded his resignation.

Pena Nieto said that Mexicans have to keep faith in the country’s armed forces despite the recent incidents in Iguala and also in Tlatlaya, where 22 suspected gang members were allegedly murdered by soldiers.

“The army is a centenary institution. The achievement of more of 212,000 Mexican soldiers must not be characterized by a few persons that could have walked away from the service principles,” the president said in his speech to commemorate Mexican Revolution Day.

But confidence in the Mexico's security forces continues to weaken since the events in Iguala and the subsequent investigation that uncovered strong ties between state and local government officials to drug and crime cartels.

“We are at no-return point," said philosophy professor Alan Casada who marched with protesters. "I think it is very important that everybody goes down in the streets right now, especially because Mexico has received much international media attention recently,“ he said.

In an effort to avoid confrontations with protesters, the government decided to cancel a military parade planned for Thursday afternoon to celebrate the 104th anniversary of the Mexican Revolution.