No contact has yet been made with the trapped miners since the collapse on Thursday at the small gold and copper mine near the northern city of Copiapo. 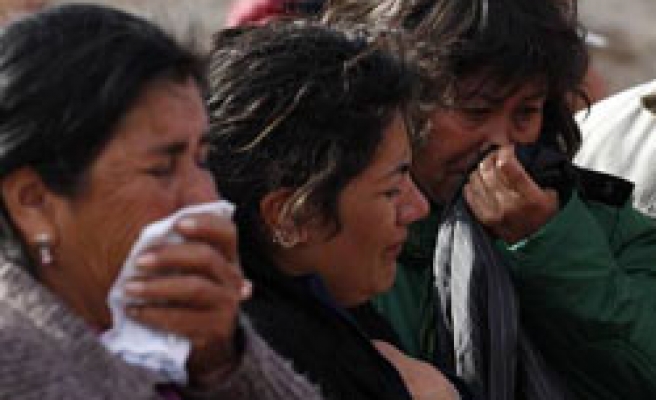 A bid to save 33 miners trapped deep inside a small mine in northern Chile hit a major setback on Saturday, when a fresh cave-in blocked rescuers and relatives started to lose hope after an anxious two-day wait.

No contact has yet been made with the trapped miners since the collapse on Thursday at the small gold and copper mine near the northern city of Copiapo. Officials hope they managed to reach an underground shelter with oxygen and were rationing water and food.

Rescuers raced against time to think up other ways to reach the miners huddled in a space the size of a small apartment.

Mining Minister Laurence Golborne, his voice cracking, said rescuers would have to find another way in, which would eat up valuable time more than two days into the crisis.

"The easiest, most logical way in is now blocked. Experts are going to have to find other alternatives, but those will be tougher and take longer," Golborne said, as miners' families gathered at the mine cried out.

He also revised down the number of trapped miners to 33 from 34, but did not explain why.

Anguished relatives, who spent Friday night at the mouth of the mine praying, wailed when they heard the news.

They later calmed down when they were told the mine had not collapsed entirely and rescue efforts would continue, though several then tried to storm the mine entrance and scuffled briefly with police, calling company officials "murderers".

"We have to wait because the rescue will go on," said local trader Crisologo Rojas, 51, whose nephew and friends are trapped in the mine, 450 miles (725 km) north of the capital, Santiago.

"Worry increases with the hours. I don't know what they're going to find down there," he added as families gathered by a bonfire set near the mine entrance as night fell.

Company officials and the head of mining trade group Sonami said they were planning to try and drill narrow holes deep inside the mine to try to locate the miners and then pass them food and water while they try to find a way to extract them.

The workers are trapped around 4.5 miles (7 kilometers) inside the winding mine, and are around 900 feet (300 metres) vertically underground.

President Sebastian Pinera cut short an official visit to Colombia, flying directly to Copiapo before heading to the mine to talk to relatives of the miners in private.

"The situation is not easy, I must tell the truth," Pinera said on arrival at the airport. "It is not just in our hands, it is also in God's."

The accident shut down the mine, one of three adjacent sites producing a combined 1,200 metric tonnes of refined copper annually.

The closure is not expected to hurt copper output in Chile, the world's No.1 copper producer. Major mining accidents are uncommon in the country, because authorities keep strict controls over operations.

Local union official Felix Medina said conditions at many smaller mines in the area are precarious. He said the mine, which employs 150 people, has a recent history of accidents, with 13 fatalities on site and three deaths on the winding road to Copiapo.

The mine lacks escape routes and was closed in 2005 by workers because of bad conditions, he added. It was reopened two years ago.