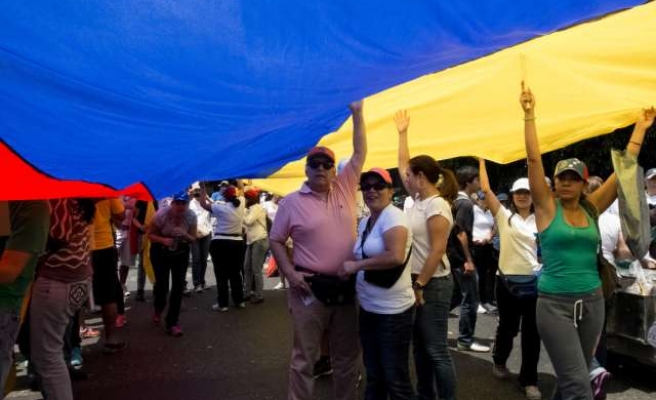 Lopez, who was arrested on Feb. 18 after helping launch a nationwide protest movement, demanded top officials including the interior minister resign over the use of force against demonstrators in violence that has killed at least 18 people.

"We must continue the peaceful struggle. There is no reason to give up our fight," said Lopez in a message read in a video posted online from an undisclosed location by a party colleague who is also wanted in connection with the unrest.

"They will never defeat those who refuse to give up."

Opposition leaders called for another march on Monday after bringing thousands onto the streets on Sunday, despite the Carnival holiday that usually draws Venezuelans to the beach.

Several thousand people gathered in the well-heeled Las Mercedes district of Caracas and marched to the local office of the Organization of American States.

Protesters in the wealthier east of the capital have clashed nearly every day with National Guard troops in confused melees that generally kick off in the early evening.

The demonstrators set up improvised barricades of debris and burning trash that are usually cleared by the next day.

There are no signs that the unrest, which Maduro excoriates as a U.S.-backed coup effort, could overthrow his government or force him to resign, despite widespread discontent with soaring inflation and rampant crime. (Full coverage: )

Venezuela's Foreign Minister Elias Jaua, who met on Monday with U.N. Secretary General Ban Ki-moon in Geneva, said the protests were not peaceful demonstrations but rather dangerous and vandalistic disruptions of public order.

"Venezuela's people have been subjected to a continuous attack over the last month that seeks to make the state look like a human rights violator," Jaua said in a speech.

"They are trying to paint a picture of generalized chaos and indiscriminate repression to justify a foreign intervention in our internal affairs."

The U.N. said in a statement that Ban expressed hope for reduced tensions and the possibility for dialogue.

The continuing protests have helped motivate the opposition, and even prompted solidarity from Hollywood stars including Jared Leto and Kevin Spacey during Sunday's Academy Awards.

A two-month national strike launched that same year which included marches almost every day ended up bolstering Chavez and weakening the opposition.

Protests in 2004 that were nearly identical to those of today helped the government paint its rivals as saboteurs willing to do anything to seize power.

The current protests are facing both natural attrition and criticism from within opposition ranks, especially the tactic of improvised street barricades.

One recent video filmed in the central city of Valencia shows opposition sympathizers in a well-to-do neighborhood attempting to clear debris from a road, while exchanging insults with residents who insist on restoring the barrier.

"How many diseases are produced by this?" asks one woman standing in an ash-filled street blocked by wooden pallets and concrete rubble. "If we're going to talk about politics, who voted for this? I didn't."

"What could be more of a dictatorship than what they're doing here?" chimes in a second angry neighbor.

Another woman is seen bleeding from a slash in her forearm, apparently after trying to move metal debris from the barricade.

Maduro sought to take the wind out of the demonstrations by extending the four-day Carnival holiday to six days, though politics has permeated many visits to the beach.

Mock tombstones and crosses were set up on a beach in the wealthy eastern town of Lecheria. Local media said they were removed by the pro-Maduro state government, then set up again by opposition stalwarts.

Cybernauts at the same time lobbied movie stars on Twitter to speak out about the situation at the Oscars, intermingling images of teargas clouds rising from the plaza with shots of Hollywood actors in black-tie garb on the red carpet.

The security response to protests has become the primary motivation for demonstrators, overtaking complaints about Venezuela's ailing economy.

Annual inflation reached 56 percent last year and the central bank's index of product scarcity recently hit a record high, even though the price of oil, the country's main export, has remained in a comfortable range of $100 per barrel.

Maduro decries an "economic war" backed by Washington, but his critics say the situation is the result of a failed system of currency controls and nationalizations that have strangled the private sector and left the economy dependent on dozens of bloated state-run enterprises.