Colombians vote in a tightly fought presidential election that has seen the top two candidates tainted by scandal as they wrestle over the pivotal issue of how to end a five-decade insurgency by Marxist FARC rebels. 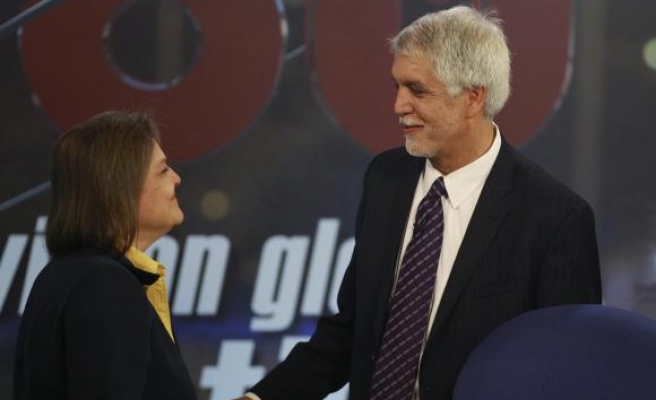 Colombians vote on Sunday in a tightly fought presidential election that has seen the top two candidates tainted by scandal as they wrestle over the pivotal issue of how to end a five-decade insurgency by Marxist FARC rebels.

The battle for the presidential palace in Latin America's No. 4 economy is between incumbent leader Juan Manuel Santos and bitter rival Oscar Ivan Zuluaga, a right-wing economist whose late surge in polls has left them neck-and-neck.

Though once cabinet colleagues as the ministers of defense and finance respectively, Santos and Zuluaga differ sharply on how to end a conflict that has killed more than 200,000 people and gave Colombia a basket-case image it shed only in recent years.

The president has staked his reputation on peace talks underway in Cuba, but Zuluaga says too many concessions are being made and could scrap the negotiations if he wins.

"We are deciding between war and peace and you can't make peace overnight," said Jhon Jairo Ramirez, a 29-year-old Bogota shoe-shiner who remained undecided on which way to vote.

"It's complicated, but such an important choice and that's why everyone's so emotional and playing dirty."

Though Zuluaga caught up with Santos in polls at the end of the campaign, even overtaking him in some, a deepening scandal over his camp's alleged hacking of peace negotiators' emails could hurt his vote share.

Santos has also been tainted over the last month by accusations that drug money was funneled into his campaign back in 2010. Both candidates have denied any wrongdoing.

However those affairs play at the polls, neither is likely to get the over 50 percent needed to avoid a runoff on June 15.

Santos began talks with the Revolutionary Armed Forces of Colombia in 2012, deepening a rift with his predecessor Alvaro Uribe. Though he backed Santos to replace him in 2010, the still-popular and powerful Uribe turned on him, forming an opposition party that picked Zuluaga as its candidate.

So U.S. ally Colombia's political debate is now polarized between those who favor negotiations and those who want peace settled, Uribe-style, on the battlefield.

Santos, 62, promises to end the war and allow the FARC a place in politics if it agrees to five points on an agenda at conversations in Havana. Last week's signing of the third point, on the illegal drugs trade, gave him a boost.

Tapping into public cynicism over FARC intentions, Zuluaga, 54, says he would give them eight days to disarm, or halt talks. He is angry the talks may mean soft sentences for rebel leaders.

On other policies, both men broadly converge, supporting market-friendly economics that contrast with the hardline socialism of Venezuela and Ecuador on either side.

Other candidates on Sunday's ballot include centrist Enrique Penalosa of the Green Alliance, Marta Lucia Ramirez of the Conservative Party and leftist Clara Lopez of the Democratic Pole. But polls show they have little hope.