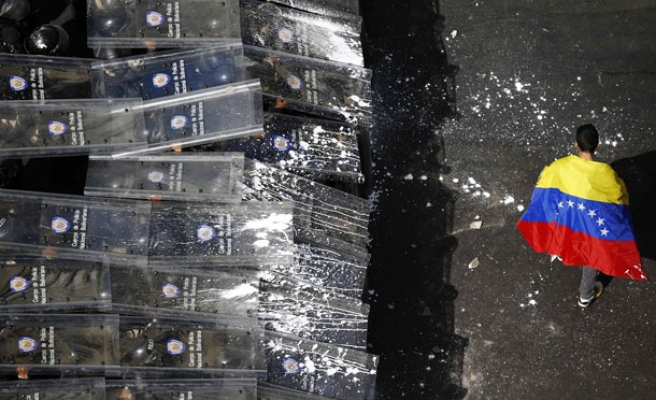 A Venezuelan opposition leader wanted by police in connection with deadly street protests told supporters via Twitter to keep demonstrating, but peacefully, and armed police visited his father's home, apparently seeking to arrest him.

Authorities accuse Leopoldo Lopez of murder and terrorism in connection with violence around four days of sporadic anti-government protests that have left three people dead and both sides blaming each other for the bloodshed.

The demonstrators have vowed to stay in the streets until Maduro resigns, although there is no sign of that happening.

The president has said he will not let them cause chaos by blocking roads, and troops have fired teargas and water cannons to clear about 1,000 protesters who lit trash bonfires and threw stones in an affluent part of eastern Caracas. Student protesters were due to gather again in the same area on Sunday.

"To the country and the students, who I've always admired and supported, the battle is in the streets, but without violence," Lopez said on Twitter late on Saturday.

Minutes later, a local newspaper reported on its website that armed police had visited the Caracas home of Lopez's father looking for the opposition leader.

Their behavior was "very civilized," Lopez senior told El Nacional, and when they found out he wasn't there, they left.

"Maduro, you're a coward," the opposition leader said later on Twitter. "You won't make either me or my family bow to you. To my family: strength. I love you."

Colleagues from his Popular Will party had said since Wednesday that Lopez was at home with advisors in Chacao, the wealthy district of eastern Caracas where he was once mayor.

But there had been no proof of that, and on Sunday a spokeswoman declined to say where he was, only that he was still in Venezuela and would not leave.

On Saturday, protesters clashed with police and national guard troops around Plaza Altamira, a square in Chacao that has long been a center of opposition activism.

The unrest underlined the problem for peaceful student demonstrators seeking to distance themselves from a masked, violent rump who have been torching tires and vandalizing property. Student leaders say they are "infiltrators."

Sporadic political protests, especially in the staunchly pro-opposition parts of the east of the capital, have become common over the last decade or so in Venezuela. But they have normally fizzled out after a few days as residents get tired of blocked streets and the smells of teargas and burning trash.

Many moderates in the opposition say demonstrations in which people get hurt and property damaged only play into the hands of critics in the government who are always at the ready to jump on any signs their rivals are violent "saboteurs."

The thousand or so protesters who have gathered in recent days in Chacao want Maduro out of power over a host of complaints including demanding the release of protesters jailed earlier in the week, and economic woes such as shortages of products, high corruption, and shocking levels of violent crime.

Venezuela state prosecutor said on Saturday that most of the 99 people arrested nationwide since Wednesday have been released pending trial, and 13 remain behind bars.