Pope calls for calm in Venezuela as both sides march

Pope Francis told tens of thousands of people in St. Peter's Square he was "particularly concerned" about recent events. 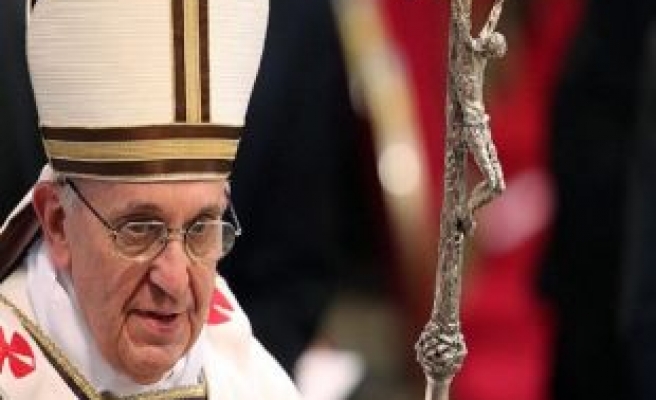 Pope Francis on Wednesday called for an end to violence in Venezuela that has killed at least 13 people and urged politicians to take the lead in calming the nation's worst unrest for a decade.

Both political camps were marching in cities around the country, with the focus being rallies in different parts of the capital Caracas: one by female opposition supporters and another by agricultural workers who support the socialist government.

Students and other opponents of President Nicolas Maduro are demanding he quit over grievances including high inflation, shocking levels of violent crime, shortages of basic foodstuffs, and what they say is his repression of political rivals.

The protests are the biggest challenge to Maduro's 10-month-old administration, although there is no sign they could topple him or affect the OPEC nation's oil shipments.

Pope Francis told tens of thousands of people in St. Peter's Square he was "particularly concerned" about recent events.

"I sincerely hope the violence and hostility ends as soon as possible, and that the Venezuelan people, beginning with the responsible politicians and institutions, act to foster national reconciliation through mutual forgiveness and sincere dialogue," Francis said during his weekly address.

Discussions must be based on "truth and justice," he added, and be able to tackle "concrete issues for the common good."

Maduro, a 51-year-old former bus driver and union boss, has invited church, business and opposition leaders to a "national peace conference" at the presidential palace on Wednesday.

However, opposition figures are not expected to attend.

In the latest of near daily demonstrations by both sides, female opposition supporters donned white clothes to march in silence from a western Caracas neighborhood to a nearby National Guard base, carrying photographs of victims of alleged brutality by the security forces.

Meanwhile, pro-Maduro farm workers clad mostly in the bright red of the ruling Socialist Party marched in the center of the capital under the slogan "Sowing peace and harvesting life!"

Opposition demonstrations began at the start of the month, but mushroomed after three people were shot dead on Feb. 12.

Maduro, who narrowly won a presidential election last April to replace his mentor, the late leader Hugo Chavez, has accused foreign media of being in league with "imperialists" abroad to project an image of chaos and repression.

About 150 people have been injured during the two-week crisis, and more than 500 people arrested. The government says the vast majority of them have since been freed pending trial.

The worst of the trouble is centered on the western state of Tachira, bordering Colombia, where officials in several municipalities reported the looting of a supermarket, clothes shops, discos and other businesses overnight. Several people were hurt by plastic buckshot fired by security forces.

Ricardo Hernandez, major of Cardenas municipality, close to the state capital San Cristobal, blamed the looting on hooded motorcyclists, and said he had needed to call on reinforcements from the national police and National Guard troops.

"We won't be intimidated by these delinquents," Hernandez said in a statement. "Take the necessary precautions, such as having telephones close to hand, doors tightly closed ... keep bells or whistles nearby in order to alert the neighbors."

Farmers in Jauregui municipality, a major supplier of vegetables to the rest of the country, said they have 15,000 tonnes of produce which they have not been able to dispatch, because of the insecurity and barricaded highways.

Shortages are particularly acute in many areas of Tachira where blocked roads and the threat of violence means delivery trucks have not reached stores for days, residents say.

Moderate opposition figures have called for peaceful protests only and voiced despair at the tactics of barricading streets and burning trash in mostly middle-class neighborhoods that are already overwhelmingly pro-opposition.

Venezuelans are approaching a long weekend for Carnival, when families typically head to the beach. Maduro extended the break by also declaring Thursday and Friday national holidays.

A few days off could take the heat out of the protests, but some Venezuelans say it could have the opposite effect as protesters have more time on their hands to hit the streets.