Seeking privileges to benefit few to detriment of many creates environment for corruption, Pope Francis says 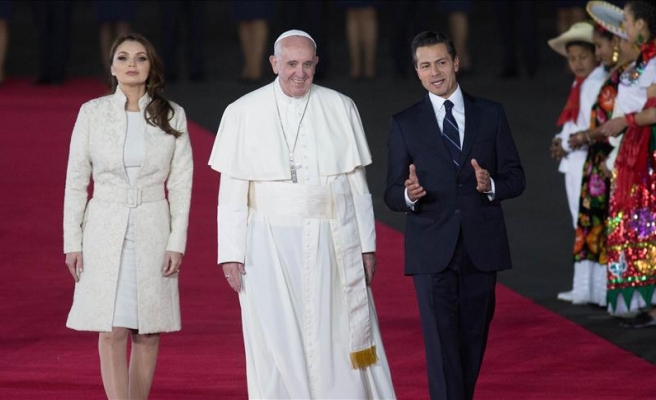 A huge crowd gathered at the Zocalo to cheer the head of the Catholic Church as he drove though Mexico’s City’s main square.

Earlier in the day he met with President Enrique Pena Nieto at the National Palace.

Francis then addressed the country’s clerical elite at the city’s Metropolitan Cathedral where he reprimanded state and church leaders, saying they have failed to help the poorest and most marginalized citizens.

He asked them to be ''more transparent'' in their dealings with the public.

"Each time that we seek for the path of privileges for the benefits for a few to the detriment of the good of all, sooner or later the life of society becomes a fertile soil for corruption, drug trafficking, exclusion, violence, including human trafficking, kidnapping and death," he said.

"Be vigilant so that your vision will not be darkened by the mist of consumerism; do not allow yourselves to be corrupted by insignificant materialism or by the seductive illusion of sneaky agreements; do not place your faith in the 'chariots and horses' of today’s pharaohs", he said.

Francis also celebrated a mass at the Basilica of Our Lady of Guadalupe, the temple of the indigenous virgin of Guadalupe considered the patroness of Mexico and Latin America.

In his homily, Francis referred directly to 26,000 disappeared people in Mexico.

"God is close to the suffering" of the families, he said. But it is still unclear if the pontiff will meet with relatives of 43 students from a male teaching college who disappeared nearly 18 months ago after a clash with local police.

On Sunday, Francis will visit a Mexico City suburb railing in recent years from the murders of large numbers of women.

He will then travel Monday to the southern state of Chiapas, the poorest in the country that also has a majority population of indigenous peoples.

On Tuesday, he will visit the violent western state of Michoacan before ending his trip in Ciudad Juarez, a border city with the U.S. state of Texas.

Ciudad Juarez was rated as the world’s most violent city between 2010 and 2012.