Protests continue in Venezuela as teen shot by police is buried

Witnesses said dozens of masked protesters faced off with security forces in streets blocked with rubbish and tires, and two police motorcycles were burned in the Andean city 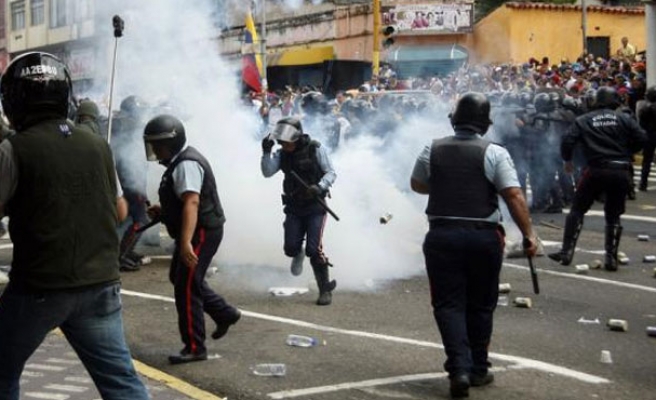 Sporadic protests flared in different parts of Venezuela on Wednesday, a day after a policeman shot dead a teenager during a demonstration against President Nicolas Maduro's government in the volatile city of San Cristobal.

The worst unrest was again in San Cristobal, where distraught relatives of 14-year-old Kluibert Roa held a wake and funeral following his killing on Tuesday.

Witnesses said dozens of masked protesters faced off with security forces in streets blocked with rubbish and tires, and two police motorcycles were burned in the Andean city, a center of last year's anti-Maduro protests and violence that killed 43 people.

Local authorities declared a day of mourning, and many shops stayed closed in fear of trouble as well as to honor Roa.

"My son was neither an opposition supporter nor a 'Chavista,' he was my son, the apple of my eye," his father, Erick Roa, said at the funeral. "They killed an innocent person."

Some 200 students and neighbors are camping out at the site of Roa's death and have installed an altar in his honor.

Maduro, the successor to late socialist leader Hugo Chavez, condemned Roa's death but also charged that violent radicals in San Cristobal and elsewhere are seeking to oust him.

Relatives and students insist he was a bystander to the protests and targeted at point-blank range, while authorities say he was shot when police were cornered by thugs.

A 23-year-old policeman has been detained and charged.

The case has exacerbated tensions amid a severe economic crisis and government crackdown on opposition leaders it accuses of conspiring to topple Maduro with U.S. aid. Foes say Maduro is panicked at his falling popularity and the prospect of losing control of parliament in a vote later this year.

In Caracas, dozens of opposition supporters rallied at the Interior Ministry and marched to the Vatican envoy's office.

In the western city of Maracaibo, hooded opposition members burned a truck carrying medicines, Maduro said. "Is that a democratic struggle or terrorism?" the president asked during a rally in the southern city of Guayana.

In Tachira's town of Rubio, protesters hijacked and burned a truck belonging to state oil company PDVSA that was transporting gas, authorities said.