On his first stop in Cuba, the Cold War ally of the former Soviet Union situated only 90 miles (145 km) from the United States, Putin met with former President Fidel Castro and current President Raul Castro before receiving the Medal of Jose Marti, Cuba's highest decoration. 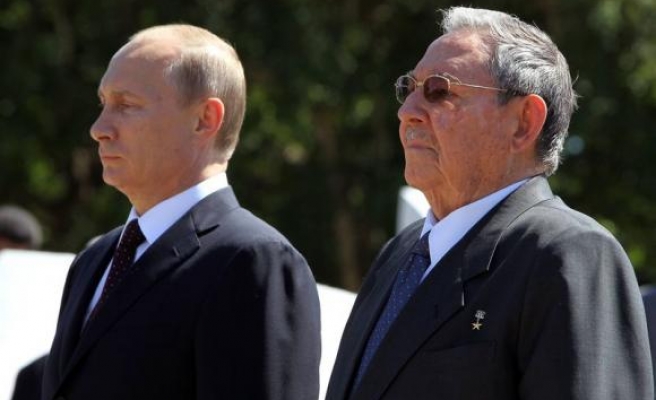 Russian President Vladimir Putin pledged to help revive Cuba's struggling offshore oil exploration on Friday at the start of a six-day tour of Latin America as Russia aims to reassert its influence on the communist-ruled island.

Putin was joined in Havana by close ally and so-called Russian oil czar Igor Sechin, the chairman of state oil company Rosneft, to finalize a deal to explore for oil off Cuba's northern coast.

The Russian president also promised to reinvest $3.5 billion of Cuban debt with Russia into development projects on the island, part of a deal in which Russia forgave 90 percent of Cuba's debt, or almost $32 billion, most of it originating from Soviet loans to a fellow communist state.

Both measures inject much-needed foreign investment into Cuba and demonstrate an act of defiance against the United States, which maintains a 52-year-old economic embargo that effectively shuts out many Western companies from doing business in Cuba.

"We will provide support to our Cuban friends to overcome the illegal blockade of Cuba," Putin said.

Putin's journey to the back yard of the United States comes as he is under pressure from the West to help restrain pro-Russian separatists in Ukraine and urge them to find a negotiated solution.

Putin will also visit Argentina and Brazil for bilateral talks, and while in Brazil he will participate in a summit of the so-called BRICS nations of Brazil, Russia, India, China and South Africa on Tuesday and Wednesday.

On his first stop in Cuba, the Cold War ally of the former Soviet Union situated only 90 miles (145 km) from the United States, Putin met with former President Fidel Castro and current President Raul Castro before receiving the Medal of Jose Marti, Cuba's highest decoration.

Fidel Castro, 87, stepped down in favor of his brother for health reasons in 2008 after 49 years in power. For an hour he and Putin discussed international affairs, the global economy and Russian-Cuban relations, the Kremlin said.

Cuba produces about 55,000 barrels per day (bdp) through aging onshore wells and imports about 110,000 bpd on favorable terms from socialist ally Venezuela.

Following a number of foreign companies whose wells have all come up dry, Russian oil company Zarubezhneft last year began drilling in Cuba's Boca de Jaruco area. That project has been suspended. Zarubezhneft also has been helping Cuba extract from existing onshore wells.

An aide to Putin in Moscow said on Thursday that Zarubeznheft would sign a new deal in Cuba along with Rosneft, but in the end only Rosneft was present.

"Developing new blocks on Cuba's offshore shelf is (expected) in the very near future," Putin said.