Rescue workers slowly closed in on 34 miners trapped deep inside a small gold and copper mine in northern Chile on Saturday. 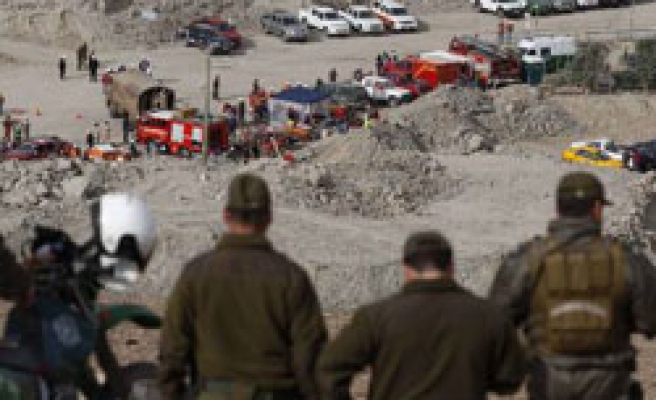 Rescue workers slowly closed in on 34 miners trapped deep inside a small gold and copper mine in northern Chile on Saturday after a cave-in, as relatives kept hopes alive in an all-night vigil.

No contact has yet been made with those trapped since the collapse at the mine near the northern city of Copiapo on Thursday. But officials said rescuers had moved past the worst of the cave-in and are hopeful they are in an underground shelter with oxygen and water.

"It is a slow process. The rescue workers will not leave until they have results, either good or bad," said Mining Minister Laurence Golborne, who arrived at the mine before dawn after flying back from a visit to Ecuador.

"As rescuers descend, we hope to have contact, signs of life, in a few more hours."

He said air was probably reaching the underground shaft where the miners are trapped, about 450 miles (725 km) north of the capital, Santiago.

Rescuers were using air shafts to try to reach the men who are trapped about 900 feet (300 metres) underground.

Relatives were optimistic after praying around a bonfire near the mine entrance all night.

"My brother is down below, but we are confident he will emerge alive along with all his companions," said 38-year-old miner Carlos Oliveros, praying in front of a small statue of the patron saint of miners, San Lorenzo.

Chilean President Sebastian Pinera, on an official visit to Colombia, has said his government would hold the mining company accountable for any safety lapses.

The accident shut down the mine, one of three adjacent sites producing a combined 1,200 metric tons of refined copper annually.

The closure is not expected to hurt copper output in Chile, the world's No.1 copper producer. Major mining accidents are uncommon in the country, because authorities keep strict controls over operations.

Union official Felix Medina said conditions at many smaller mines in the area are precarious. He said the mine employs 150 people and has a recent history of accidents, with 13 fatalities on site and three deaths on the road to Copiapo.

The mine has no escape routes and was closed in 2005 by workers because of bad conditions, but was reopened two years ago, he added.