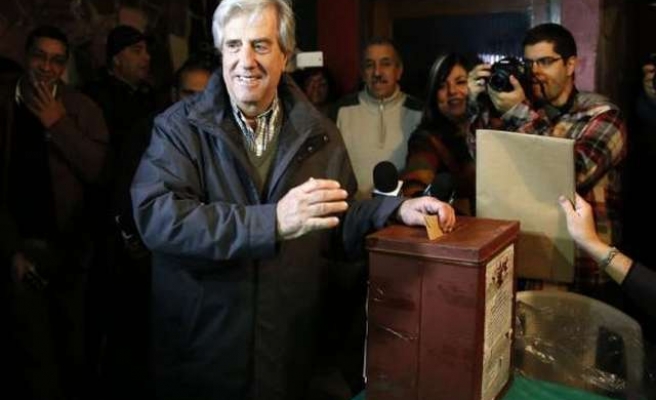 Two polls released this week show the 74-year-old oncologist will clinch the election by a 12- to 15-point margin to keep the leftist Broad Front party in power after a decade of rule.

Vazquez won the Oct. 26 first round with 47 percent of the vote, besting the 30 percent of second place-finisher Luis Lacalle Pou, a 41-year-old lawyer and legislator of the conservative National Party.

A margin of at least 50.1 percent of votes was needed to skirt a runoff.

In the second round, Vazquez likely will snare between 53 and 55 percent of the vote and Lacalle Pou between 39 and 41 percent, according to Factum, a political consultancy and pollster in Montevideo.

If the polls are correct, Vazquez will return to a job he held from 2005 to 2010, breaking decades of rule by the traditional Colorado and National parties.

His first term – there is no immediate re-election in Uruguay – was marked by cautious economic policy, albeit with an increase in state spending and taxation, along with a broadening of commercial ties to reduce a reliance on trade with Argentina.

Uruguay’s economy suffered badly after Argentina fell into a 2001-02 crisis that restricted trade with its neighbor across the Rio de la Plata estuary.

Vazquez’s successor, Jose Mujica, helped to bring even more popularity to Broad Front with progressive reforms such as the legalization of abortion, gay marriage and marijuana, as well as a personal stance against wealth accumulation.

Mujica, 79, has been described as the world’s poorest president, a status he appears to like to hone by living in a small ranch house and driving a 1987 Volkswagen Beetle, his only car.

He is popular. A poll by Equipos Consultores released this week shows that 65 percent of the 3.3 million Uruguayans approve of his performance as president.

Broad Front “has emerged as the most powerful coalition since Uruguay re-established democracy in 1985,” Jason Marczak, deputy director of the Atlantic Council’s Adrienne Arsht Latin America Center in Washington, said in an emailed statement.

Even so, Marczak warned that slower economic growth in neighboring Argentina and Brazil, still big trade partners with Uruguay, likely will force Vazquez to temper conservative voices in the National Party and his own, to avoid a sluggish economy at home.