Search for missing students in Mexico expands to 300 people

Families of missing persons in Mexico form group to seach for loved ones in wake of missing students case. 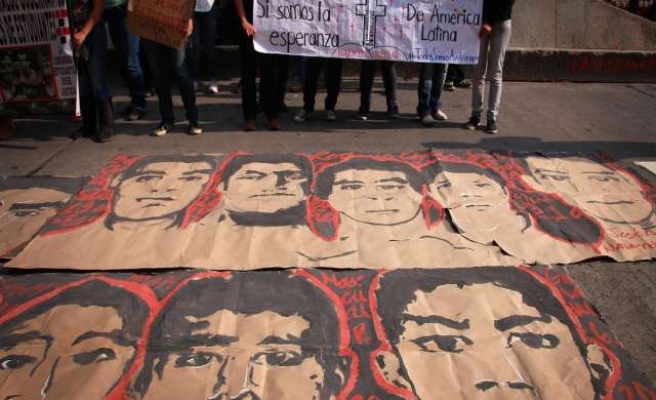 Mayra Vergara Fernandez has been searching for her brother, Thomas, for more than two years in the municipality of Huitzuco, about 20 miles from Iguala, Mexico.

“I went to the mountains two days ago and I could not tell my mom about the atrocities I have seen,” she said. “There are bones everywhere. But the authorities did not want to help us with that. That is reason why we are here today. To do the job by ourselves.”

Vergara Fernandez is speaking about 50 people who formed a circle on Sunday in front of the windowless City Hall in Iguala, a building that bears the scars of violent protests for the return of the 43 missing students, who disappeared here two months ago, after clashing with police.

Those protests helped spark international attention on the case, including global protests in more than 200 cities across the world last week, including in many U.S. cities.

But most of those who showed up from Iguala and the surrounding towns in the southwestern state of Guerrero on Sunday, they have quietly shared for years the heavy burden that comes from the emptiness left by the disappearances of their sons, wives, brothers and other relatives and friends.

The 50 odd searchers call themselves The Iguala Front for Dignity, whose sole purpose is to find out what happened to hundreds of missing people from Iguala.

Armed with shovels, pickaxes and bravery, they gathered together to explore the soil of the mountains that surround Iguala – now cemeteries since 38 corpses were found in recent weeks during the search for the missing students.

Many of the searchers headed out in anticipation that they were going to step into a nightmare.

According to Oscar Maurico Gonzalez, a priest in Iguala, the missing students case gave courage to families of 300 missing people in Iguala and the surrounding towns to gather and search for their relatives, but most likely their remains, in an attempt to begin the grieving process.

“Fear is the major obstacle to the denunciation of disappearance,” he said. “Those people are afraid of reprisals that other relatives or themselves could also vanish. But now, with the group that we are forming, several citizens come to the church everyday to join the group and share their pain,” said Gonzalez, who is a leader with the Iguala Front of Dignity.

Under a scorching sun, the group climbed into pickup trucks, cars and small buses headed for the frightful hills.

A few miles away, a peasant climbed in the first car saying he knew the location of a burial area called La Laguna that had not yet been explored.

Once there, the searchers dig the soft topsoil without too much effort. The sounds of the shovels and pickaxes that resonated throughout the verdant hills is quickly mixed with the shouts of the diggers.

“There is a bone here. It’s a femur,” said an older man. The diggers discover five mass graves containing what appears to be human remains in the bowels of the La Laguna forest. “This scapula bones is really small. There is a kid or a very small person buried there,” said Citlalli Miranda, one of Iguala Front's leaders.

The lay diggers are careful to be respectful and not disturb any possible evidence. “Don’t touch any remains and pay attention where you are walking, you could infect the area and the remains,” said Julia Alonso, a member of Civil Governance Forensic (Gobernanza Forense Ciudadana), a Mexican non-profit that works to improve the justice system through better understanding of forensic practices.

“There are no forensic with us today, so we put the soil over the remains and identify them with a flag on the mass grave,” Alonso explained. “We expected the attorney general’s forensic experts to come back on Wednesday. We want to come, too, and supervise their work. We will also remove samples to run our own tests.”

Her organization obtained funding to initiate a project to create the first national blood bank.

“The monies comes from England and the samples will also be sent there, to Durham University. For now, we will be able to list 50 missing people in Guerrero,” according to Alonso. The funding will allow the organization to identify approximately 500 missing persons in Mexico.

The initiative is a small step in the creation of a national DNA bank as more than 22,000 people have been missing in the country since 2006, according to official data.

In addition to the help from the Civil Governance Forensic team, Iguala Front for Dignity also benefited from the help of the UPOEG, a civil organization in Guerrero that has recently identified most of the mass graves near the city, while searching for traces of the missing students.

The 3,000-member group describes itself as community police officers who replace the local corps.

“Local police is generally infiltrated by organized crime and do not provide much help to the citizens of Guerrero,’’ said Miguel Angel Gimenez Blanco, a UPOEG leader.

“We came to Iguala in solidarity with some of our members that have lost a son that night of Sept. 26. Today, we are here to help this group to organize itself, to show members how and where to dig for example. But then, they will have to assume their responsibilities alone,” he explained.

The group of searchers then headed to Cedro de la Joya, an area a few miles away, that held horrific discoveries for some.

Two more graves were found. One contained what appeared to be a human jaw. “It is my son,” screamed Maria Luiz Sebastian, while in tears. The slender, aged woman, had not seen her son for two months.

“I have nothing to lose anymore. I am old, they can come and get me. But I want to know where is my son and maybe is just there,” she said while pointing to the grave.

Iguala Front of Dignity called local police several times to assist in their search but officers arrived in the mountains just as the sun began to vanish behind the mountains.

A federal forensic team is supposed to return Wednesday to the cemetery hills to exhume the remainder of the graves, under the eyes of the locals but relatives of the missing have lost faith in the authorities.

“We don’t know who is who. We denounced the disappearances to the authorities, but they did nothing for us,” Vergara Fernandez said.

“The bones that we found days before in the mountains remain there. How do they think we feel when we see these bones?," she asked rhetorically. "Really, they are heartless,” she said with tears rolling on her cheeks.