The election could decide whether the commodities powerhouse takes a more market-friendly direction that attracts investment needed to revive the world's seventh-largest economy. 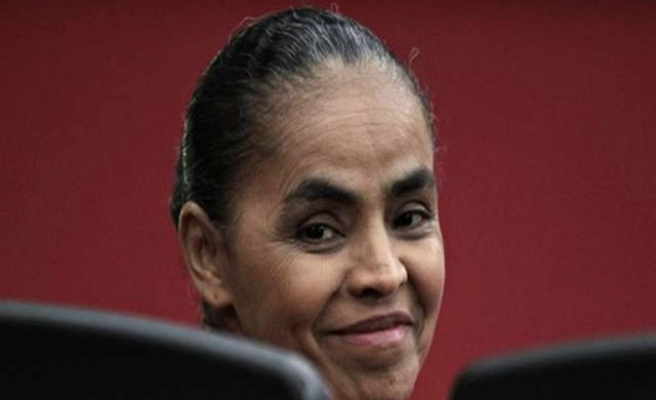 A surging Marina Silva has narrowed President Dilma Rousseff's lead in Brazil's presidential race, a new opinion poll showed on Tuesday, paving the way for a likely second-round runoff in which the popular environmentalist looks well-positioned to win.

Silva, who was thrust into the presidential race last week following the death of her party's candidate, has 29 percent of voter support heading into the Oct. 5 vote, according to the survey by polling institute Ibope.

The poll showed Rousseff with 34 percent, down from 38 percent in the previous Ibope survey in early August. The other main opposition candidate, Senator Aecio Neves, has also dropped four percentage points to 19 percent since the last Ibope poll.

The election could decide whether the commodities powerhouse takes a more market-friendly direction that attracts investment needed to revive the world's seventh-largest economy.

A renowned defender of the Amazon rainforest who placed a strong third in the 2010 presidential election, Silva has upended this year's race since declaring her candidacy last Wednesday. However, many political analysts warn that both Rousseff and Neves have plenty of television ad time, along with more powerful and better-funded parties behind them, to counter Silva's rise before election day.

Silva surged 10 percentage points ahead of Neves, the centrist candidate favored by investors, and now threatens to dislodge the ruling Workers' Party in its toughest election since it won office in 2002, the Ibope poll showed.

A separate poll due to be published on Wednesday by the transport industry lobby CNT will also show Silva surging and support dropping for Rousseff and Neves, the CNT said in a statement on Tuesday.

"Silva is the favorite for the runoff, where she will draw more of Neves' supporters than Rousseff," said Carlos Melo, a political scientist at the Insper business school.

Silva's big asset is her low rejection rate, just 10 percent compared with 36 percent of voters who said they would never vote for Rousseff, which indicates the president does not have much room to grow but her challenger does.

Despite Brazil's high cost of living and a stalling economy, the Rousseff administration's approval rating rose two percentage points to 34 percent, a number her party is bound to point to as evidence that things are not that bad.

"Marina has become the No. 1 factor in the election," said a Rousseff campaign official who asked not to be named. Silva has become the catalyst of opposition sentiment, but now she will become the target of all the candidates, he said. "We have to see what the other campaigns will do to deconstruct her."

A feisty Silva took Rousseff to task in an election debate on Tuesday night when she touted her government's achievements in improving social conditions and defending wages in the midst of global economic crisis.

"The colorful Brazil that President Dilma has described only exists in the cinema," said Silva, vowing to shake up Brazil's politics by governing without murky pacts with traditional parties but also inviting their brightest minds to join her.

Analysts say Silva has benefited from sympathy over the tragic death of Eduardo Campos, who had invited her to join his ticket as his running mate, and they will be watching a series of opinion polls this week to see if support for Silva wanes after the initial surge.

Silva is seen as an anti-establishment figure who could restore ethical principles to Brazilian politics and she appeals to voters who are disenchanted with Brazil's main parties. A fervent evangelical Christian, she will also draw votes from this growing religious constituency.

The poll showed Silva stealing support from all candidates, including another evangelical candidate Pastor Everaldo, and drawing uncommitted voters into the election.

The prospect of Silva defeating Rousseff has rallied Brazil's stock market for two weeks, with investors betting on an end to the leftist president's interventionist economic policies, which have undermined business confidence in the once high-flying emerging market economy.

Yet Silva's intransigent style of politics may make it difficult for her to build the coalitions with traditional political parties that she would need to govern Brazil.

"The critical challenge for Marina over the next two weeks will be to transition from being a protest vote candidate to someone voters are willing and able to trust to lead the country," the Eurasia political risk consultancy said in a note to clients.

Silva's economic platform will be announced on Friday. While her policies remain a mystery, her top adviser, Eduardo Giannetti, has said they will be as orthodox and market-friendly as those of Neves.

Silva met recently with bankers in Sao Paulo and said, if elected, she would mostly delegate economic policy to a respected group of advisers. "I'm not going to try to manage something I don't understand," one banker present quoted her as saying.

Ibope surveyed 2,506 people nationwide between Aug. 23-26 for the poll, which was published on the website of the O Estado de S. Paulo newspaper.