Silva tries to score points from latest scandal in Brazil 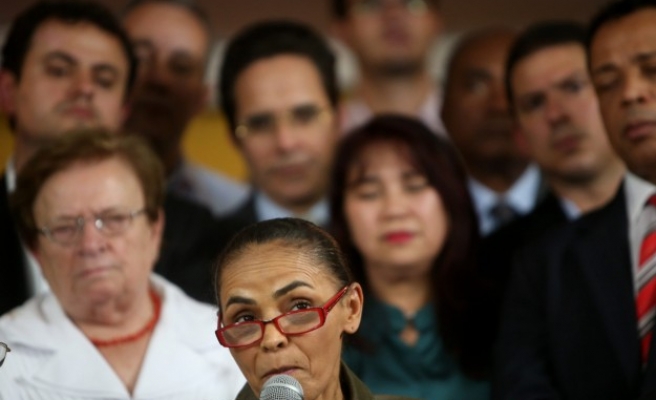 “Petrobras and the current government … let all of this outrage happen in one of the most important companies in the country,” Silva told reporters Monday in response to a question about allegations that more than 40 politicians were involved during the past decade in a vote-buying kick-back scheme.

On Saturday, the Brazilian news magazine Veja revealed the names of dozens of politicians implicated by ex-director of Petrobras Paulo Roberto Costa in the scheme, that allegedly saw lawmakers receive payments from Petrobras contracts in return for support in congressional votes. Costa has been in jail since March on charges of alleged corruption.

The lawmakers reportedly belong to the ruling Workers' Party, its ally the Brazilian Democratic Movement Party or the Progressive Party, and include Minister of Mines and Energy Edison Lobao and Senate President Renan Calheiros.

Another of Rousseff’s opponents in the October election, Aecio Neves of the Brazilian Democratic Socialist Party, has called the scandal “mensalão 2,” referring to the huge vote-buying corruption scheme that took place during the administration of former President Luiz Inacio Lula da Silva. Neves on Monday said the Petrobras allegations were “extremely serious,” but said he would wait for more information and would “not make a personal pre-trial judgment in relation to this or that name.”

The mensalão scandal had similar timing; it broke about a year before the end of Lula’s first term in office. As a very popular incumbent who always insisted that he knew nothing of the scheme, Lula was re-elected.

But Rousseff is already struggling with a discontented electorate, a stagnant economy and has, as president, made a concerted effort to link herself with Brazil's oil industry, even as Petrobras’ debt grew and its production declined.

“The potential for this to damage [Rousseff’s chances of re-election] is quite large, because she was part of the whole machine,” political scientist David Fleischer told Anadolu Agency.

Before becoming president, Rousseff held positions under Lula as Minister of Mines and Energy and Chief of Staff, as well as sitting on the board of directors of Petrobras.

“It happened during her watch,” Fleischer added. “It’s getting very close indeed.”

Nor is this not her first scandal. Already this year Rousseff has faced repeated calls from the opposition to answer questions about a suspicious deal made while she was on Petrobras’ board that saw the company overpay hundreds of millions of dollars for a refinery in Texas.

Even before the scandal broke, Rousseff had been losing ground in the polls to Silva, who has shaken up the race since entering in August, following the death of former Brazilian Socialist Party candidate Eduardo Campos in a plane crash. The most recent polls show Silva winning the election in a second round.

Fleischer said that this Petrobras scandal could be the final straw for Rousseff’s campaign.

“I think this will stop her from being elected,” Fleischer said. “I think voters who are angry and turned off and discontented will flow to Marina,” he said.