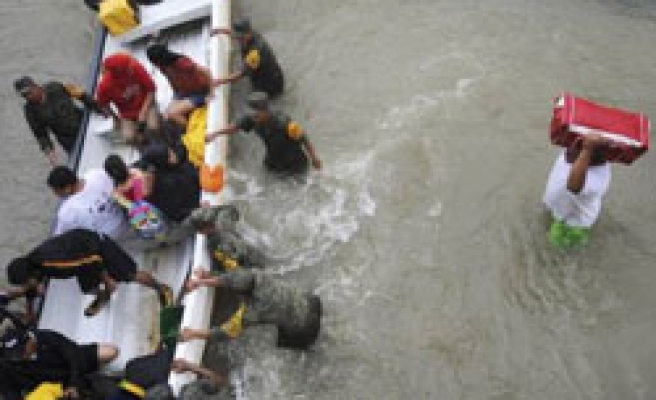 Hermine, the eighth named storm of the Atlantic hurricane season, was expected to weaken as it moved ashore but could trigger deadly flooding and tornadoes, the U.S. National Hurricane Center said.

Authorities in Tamaulipas state where the storm made landfall evacuated 3,000 people from high-risk areas but had no immediate reports of damage or injuries.

The storm's forecast path kept it away from major oil and natural gas installations in the Gulf of Mexico, and energy companies said there had been no affect on their operations.

The Miami-based hurricane center warned the storm could dump heavy rain on the coastal region and would pack a 2-to-4-foot (0.75-to-1.25-metre) storm surge that could cause deadly flash flooding and mudslides.

Hermine made landfall at about 8:30 p.m. CDT (O130 GMT) around 40 miles (65 km) south of the Texas border city of Brownsville. After moving inland, its winds diminished to 60 mph (95 kph). The storm was forecast to weaken further on Tuesday as it kept moving over land.

Hurricane Alex hit northeastern Mexico in July, killing 12 people and causing heavy flooding in the business capital of Monterrey. Damage from the storm was estimated at $700 million.

Hermine was expected to dump 4 to 8 inches (10 cm to 20 cm) of rain over northeastern Mexico and south Texas, with isolated maximum amounts of 12 inches (30 cm) possible, the hurricane center said.

In the Mexican coastal city of Matamoros, residents braced for flooding as authorities remained on high alert. The drainage system is often clogged with garbage and prone to overflow during heavy rains.

"Every time there is a hurricane or a storm, we have problems," said Rene Polanco, 48, who works in a supermarket in Matamoros, across the border from Brownsville. "It's because of poor drainage in the city."

At least 30 residential areas could be in danger from floods, although no evacuations had started yet, an official for the city's civil protection said.

In the Atlantic, the remnant of Tropical Storm Gaston continued to move westward and had a medium chance of reforming as a tropical cyclone during the next 48 hours.

Storm models predicted Gaston would travel almost due west, which would take it very close to Puerto Rico, the Dominican Republic and Haiti.