On strike since last week, over 7,000 teachers and educational staff take to the streets of Rio de Janeiro on Wednesday to demand better wages and conditions 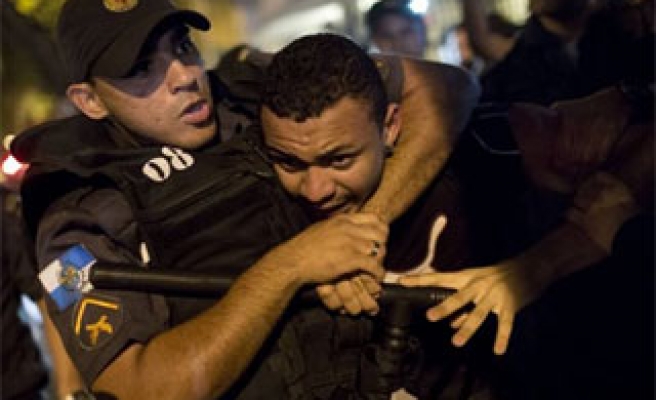 Teachers and educational staff in the Brazilian city of Rio de Janeiro, on strike since last week, took to the streets on Wednesday to demand higher wages and more autonomy over how they teach. Both organizers and police say at least 7,000 people have joined the protest.

Teachers have called for a 19 percent readjustment in wages, greater focus on career plans throughout the sector, and more independence over what is taught in classrooms – including apportioning a third of school time to extracurricular activities, such as sport and music.

Teachers are also demanding staff be hired through public competition tenders, a practice common in other sectors in Brazil.

A number of streets were closed by police as the protest made its way through the Botafogo neighbourhood of Rio’s upmarket South Zone, towards the Palácio da Cidade – the office of Rio’s Mayor Eduardo Paes.

Although the protest was peaceful, the atmosphere was described as hostile, with some protesters booing police and others launching vocal attacks on both Paes and Rio state governor Sérgio Cabral – both of whom have borne the brunt of Rio’s protest movement anger.

Some local businesses temporarily pulled down shutters in case of clashes with police and cases of vandalism, which have accompanied many of the city’s protests in recent weeks, but protesters urged them to remain open, reassuring shop owners that there protest was “just about education”.

Demands to talk to the mayor

Later union leaders called an end to Wednesday’s protest over loudspeakers, but some protesters vowed to continue the protest, saying it would only end once they had been granted a meeting with the Rio mayor.

SEPE, the state teachers’ union, said that talks on Tuesday with Deputy Mayor Adilson Pires had been unproductive, and that a meeting had been promised between Paes and teachers to negotiate their demands.

“The strike is likely to be long [and] go on for a month,” Globo News reported SEPE Director Márcio Franco as saying. A new union meeting is set to be held on August 20 to decide which direction the strike, which began on August 8, will take.

A number of local residents and businesses showed their support for the teachers’ protest by displaying banners in their windows and applauding as the procession passed their buildings.

The rally began in the Largo do Macho – an area which has seen many protests in recent weeks, most notably during the visit by Pope Francis for World Youth Day in July.

Although protests in Brazil are now much smaller in scale than those seen in June – when over a million Brazilians took to the streets in anti-government demonstrations demanding better public services, political reforms and an end to corruption and police violence, there have been protests almost every day for over two months now, and their momentum has continued, to the surprise of many.

Indeed on Wednesday protests were due to be held in at least five state capitals, including São Paulo and Porto Alegre – bus price increases in which initially sparked mass protests in June.

An emotional protest is also planned for later on Wednesday in Rio’s pacified Rocinha favela to mark a month since the disappearance of Amarildo de Souza.

The 47-year-old bricklayer has not been seen since he was questioned by police officers at the favela’s UPP (Police Pacification Unit) and assumed police involvement in the disappearance spawned a rash of protests with the slogan “Cadê o Amarildo?” (“Where is Amarildo?”).

Twitter hashtag #cadeoamarildo has also trended high on a number of occasions in recent weeks.

Rio has seen many of its protests turn violent since the beginning of June. Police have repeatedly resorted to using rubber bullets and tear gas bombs, leading to widespread criticism and the replacing of the Chief Commander of Rio’s military police force.

The tendency for the continuing protests to flare up at certain times – particularly when there is more international scrutiny of the city, as with Pope Francis’s visit, has raised red flags both with local politicians, many of whom will seek re-election in next year’s crunch vote, and with organizers of next year’s World Cup and the 2016 Olympics.