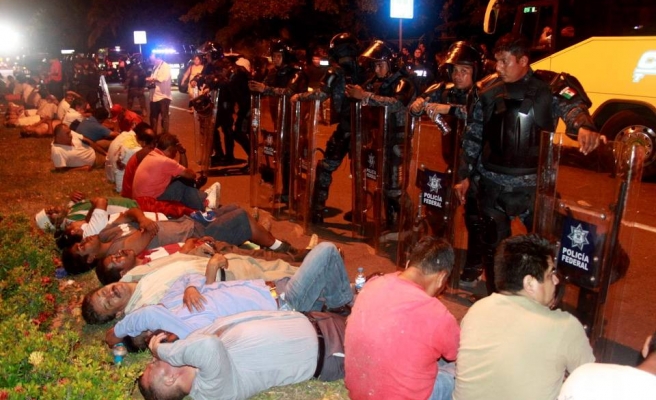 Relatives of the students led the passive protest that attracted mostly students and workers unions from Mexico City.

The families have not given up in their fight for justice, even though authorities shelved the investigation last month and said the students were murdered and cremated by a local criminal gang.

“Five months later, we still don’t have words to express what they do to us,” said Maria Tlatempa, a mother of one of the missing students. “The government knows were they are. Give us our kids back,” she said as the crowd chanted, ‘’Go away Pena,” in reference to President Enrique Pena Nieto.

Earlier Thursday, about 1,000 teachers marched in Acapulco, two days after 65-year-old retired teacher Claudio Castillo Pena was killed during a protest there for unpaid wages for school staff.

Authorities said Castillo was hit and then run over by a vehicle but the teachers union in Guerrero, CETEG, contends Castillo died from injuries he sustained after police hit him during the march.

The union also said four female members were raped during the protest and some teachers and students were injured.

“As federal police were repressing protesters, the female teachers said officers forced them to climb in a pick-up, took them to a dark alley and raped them,” union spokesman Manuel Salvador Rosas told a local radio station, adding that some union members were still missing.

The violence between police and teachers erupted when a bus drove into a line of riot police officers sent to quell the protest at the Acapulco international airport.

The teachers union said the bus was not driven by one of its members.