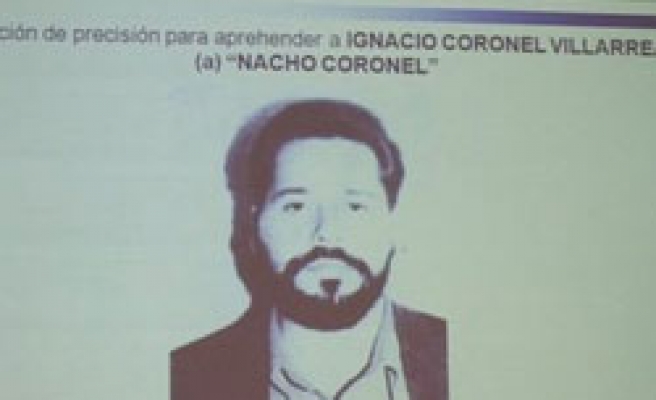 The Mexican army shot dead Coronel, a senior member of the powerful Sinaloa cartel, as he exchanged fire with soldiers during a raid of a wealthy residential area in Guadalajara in western Mexico, officials said.

One of the country's most-wanted traffickers, Coronel was known as the "King of Ice" for his multimillion-dollar methamphetamine business and was a top lieutenant of Sinaloa leader Joaquin "Shorty" Guzman, Mexico's top drug lord.

Coronel, 56, was indicted in a Texas court for allegedly smuggling tonnes of narcotics into the United States and Europe since the early 1990s. The United States had offered up to $5 million for information leading to his capture.

Troops backed by military helicopters swarmed normally quiet streets in the upscale residential area of Zapopan in search of Coronel, who the army said led a low-profile life moving between two luxury houses in the area.

Drug trade experts cautioned that the Sinaloa cartel is a sophisticated, highly organized operation and was likely to bounce back quickly. "This is going to have a temporary impact on the methamphetamine market ... but someone else is going to take his place," said security analyst Alberto Islas.

More than 26,000 people have died in drug violence across Mexico over the past 3-1/2 years, in a growing worry for the administration of U.S. President Barack Obama.

President Felipe Calderon replaced his interior minister this month after coming under increasing pressure for the rising death toll in the drug war and a lack of victories since security forces shot dead top drug baron Arturo Beltran Leyva in December.

A car bomb with 22 pounds (10 kilos) of explosives in Ciudad Juarez this month, the first attack of its kind, and the revelation that prisoners moonlighting as hitmen were behind the killing of 17 people at a party have weighed on Calderon.

Suspected drug hitmen ambushed and killed the frontrunner candidate for a gubernatorial election in the northern state of Tamaulipas in late June, in the worst sign so far of political intimidation by smuggling gangs.

Calderon, in Guadalajara for the opening of a new soccer stadium on Thursday, did not comment on Coronel's killing, but the army said in a statement it believed the hit would "significantly affect the operating capacity and shipment of drugs by Guzman's organization."

Previous actions under Calderon's predecessor President Vicente Fox, including the 2003 arrest of Gulf cartel leader Osiel Cardenas, one of the most powerful capos, did little to weaken Mexico's brazen drug cartels, however.

Security specialists say Calderon will struggle to beat the cartels until Mexico backs up its military fight with a crackdown on money laundering and pushes ahead with a genuine overhaul of ill-paid police, many of whom work as hitmen, and prevents politicians from taking funding from drug gangs.

"There is a different political problem -- governors and political parties are not taking responsibility. It's time for Mexican society to line up behind the president and fight this scourge in Mexico," said Tony Payan, a drugs expert at the University of Texas in El Paso.