Thirty-three Chilean miners trapped deep underground for 17 days sent a message to the surface on Sunday, saying they were all still alive. 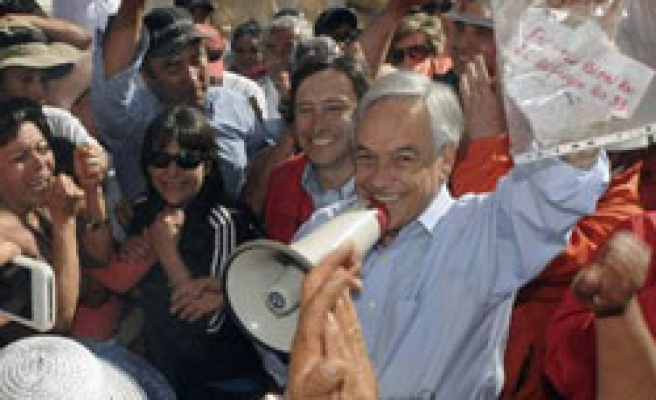 Thirty-three Chilean miners trapped deep underground for 17 days sent a message to the surface on Sunday, saying they were all still alive, but experts said it would take months to dig them out.

President Sebastian Pinera said the paper message was tied to a perforation drill that rescuers used to bore through to the area near an underground shelter, where the miners took refuge after the August 5 collapse at the small gold and copper mine in the far north.

"The 33 of us in the shelter are well," read the message written with red paint on the piece of paper that Pinera held up on television. Pinera has vowed a major overhaul of the mining regulator in the world's No.1 copper producer.

The accident has put a spotlight on mine safety in Chile, though accidents are rare at major mines and the incident is not seen having a significant impact on the country's output.

Rescuers lowered a television camera down the bore-hole, and some of the miners looked into the lens. Some were bare-chested because of the heat in the mine, and officials said they looked in better-than-expected condition.

As night fell, elated relatives of the trapped miners gathered with rescue workers around bonfires for a barbecue, celebrating with traditional live music and dance as a cold fog enveloped the mine head.

In the capital of Santiago, around 200 people gathered at the main plaza, waving flags to celebrate the news. Drivers honked their horns and diners applauded in restaurants.

"It will take months" to get them out, the beaming president said at the mine head. "It will take time, but it doesn't matter how long it takes to have a happy ending."

The miners are 4.5 miles inside the winding mine and about 2,300 feet vertically underground. They are inside a mine shaft shelter the size of a small apartment.

Authorities said they had limited amounts of food, and doctors advised sending down glucose, enriched mineral water and medicines as well as other foods. Health officials estimated the miners may have lost about 17.5 to 20 pounds (8 to 9 kg) each.

Deep in the mine, located near the northern city of Copiapo, there are tanks of water and ventilation shafts that helped the miners to survive. They used the batteries of a truck down in the mine to charge their helmet lamps, some of which were shining in the television images.

"God is great," 63-year-old Mario Gomez, the eldest of the trapped miners, wrote in a letter to his wife attached to the drill along with the message, which Pinera read on television.

"This company has got to modernize," he added. "But I want to tell everyone I'm OK, and am sure we will survive."

Relatives hugged, kissed and thanked God as news of the message spread outside the entrance to the mine, where they have camped out since the mine caved in on August 5.

For Gomez's 28-year-old daughter, news that the miners were alive felt like a dream.

"When he comes out, I'm going to give him a million kisses," she told Reuters at the mine. "No-one will be able to take this happiness away from me. I've never felt anything like this in my life. It's like being born again. I can't wait to talk to him."

The miners' plight has drawn parallels with the story of 16 people who survived more than 72 days in the Andes mountains after a 1972 plane crash. Their story was later made into the Hollywood movie "Alive."

Rescuers plan to reinforce the bore-hole and then send narrow plastic tubes called "doves" down it with food, hydration gels and communications equipment.

The mine, however, is unstable, and rescue workers were forced to abandon attempts to dig past the main cave-in and down a ventilation shaft.

The plan is now to dig a new shaft to enable the trapped miners to leave, which will take months. Rescue workers say it could take as much as 120 days to dig a new tunnel to reach them.

Pinera fired top officials of Chile's mining regulator and vowed a major overhaul of the agency in light of the accident.

Serious mining accidents are rare in Chile, but the government says the San Jose mine, owned by local private company Compania Minera San Esteban Primera, has suffered a series of mishaps and 16 workers were killed in recent years.