Tropical Depression Matthew churned over Guatemala, soaking already waterlogged sugar and coffee farms, and the government warned that mudslides could occur in the coming days. 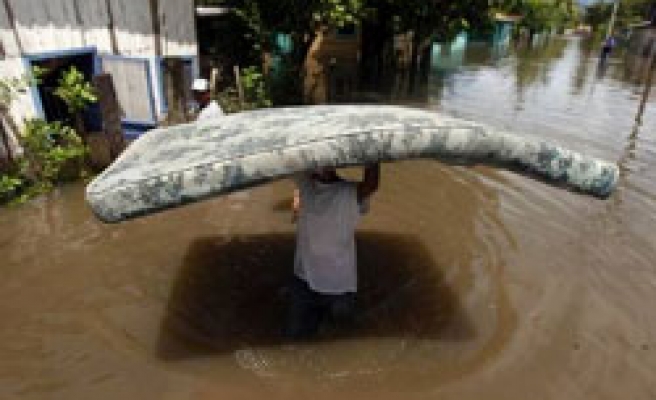 Tropical Depression Matthew churned over Guatemala on Saturday, soaking already waterlogged sugar and coffee farms, and the government warned that mudslides could occur in the coming days.

Guatemalan President Alvaro Colom told people to stay home and urged communities in mountains and near rivers to take shelter inland as fast-moving Matthew looked set to slow and hang over Guatemala and Mexico's Yucatan Peninsula.

The storm lost force as it came in from the Gulf of Honduras and its maximum sustained winds decreased to near 35 mph late on Saturday. The U.S. National Hurricane Center said the danger had not yet passed.

"We must emphasize that despite the expected weakening of Matthew, torrential rains will continue over most of Central America during the next several days," the center said.

Although it was expected to weaken, Matthew still had the potential to bring 6 to 10 inches to Guatemala and southern Mexico and as much as 15 inches to some areas. The storm was moving west-northwest and could become almost stationary by Sunday night.

The hurricane center warned Matthew's rains could set off mudslides and flash floods.

Matthew is seen dying out over the Mexican states of Tabasco and Chiapas and looked less likely to reach oil-producing areas of the southern Gulf of Mexico, but Mexican President Felipe Calderon said in his Twitter feed that his government was on alert.

Coffee and sugar farmers face rain on already clogged fields from this year's active hurricane season that has already battered the region. Growers worry rain from Matthew could delay the start of coffee and sugar harvests.

"A lot of ground is already saturated and it could result in landslides," Guatemala's emergency services agency, CONRED, said in a statement.

"We expect that in some places there could be flooding and rivers overflowing," said Eddy Morales, director of the country's meteorological institute.

High winds and heavy rain soaked Honduran tourist resorts along the Caribbean coast and hundreds of people spent the night in Honduran government-run shelters but were relieved the fast-moving storm left towns unscathed.

"The storm looked really dangerous and the rains were heavy, but in the end it passed without doing much," said Juan Angel Delgado, a retired resident of the tourist town of Tela.

Matthew hit Nicaragua's Atlantic coast on Friday afternoon, powered along the Honduran coast before hitting Belize and Guatemala on Saturday.

Sugar losses might be serious because cane fields are still flooded from earlier rains. Coffee trees also risk disease and fungus from too much moisture.

Central America produced 4.43 million tonnes of sugar in the 2009/10 harvest and was hoping for a larger crop this year.

Matthew's rains, if they last for days, could start affecting coffee in Guatemala, exporters and producers said.

More than 260 people have died in Guatemala so far this year in mudslides and flash floods. In 1998, Hurricane Mitch tore through Central America, killing more than 11,000 people. It was the second most deadly storm on record.

Seven people died in floods in a slum on the outskirts of the Venezuelan capital, Caracas, on Friday after Matthew's westward passage brought heavy rain to coastal regions of Venezuela and Colombia in the past few days.

On the other side of the Atlantic, Tropical Storm Lisa, the seventh of the season, was about 600 miles north-northwest of the Cape Verde Islands and posed no immediate threat to land or oil assets.