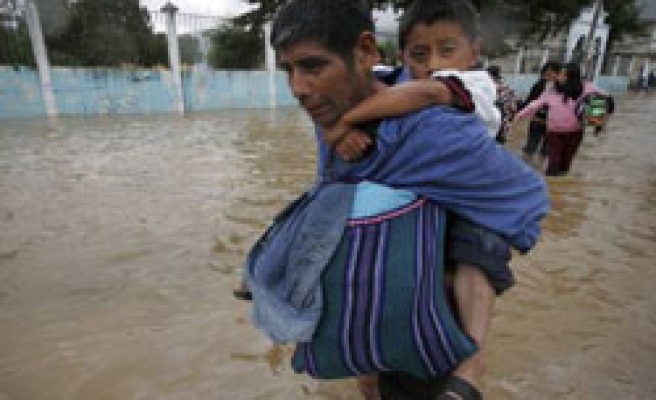 Across Central America, people in coastal and low-lying areas waded through flooded streets carrying children and belongings and rescue workers worked to open roads blocked by small mudslides. One man was swept away by high waves in a coastal town in El Salvador and a fisherman drowned off Nicaragua's Caribbean coast, officials said.

The storm, the 13th named storm of the Atlantic hurricane season, reached Mexico's southern state of Chiapas, flooding streets, uprooting trees and forcing evacuations -- but was expected to dissipate over the next few hours.

Mexico's oil ports were open on Sunday afternoon and the storm appeared to pose no threat to Mexico's Gulf oil wells.

Honduran authorities evacuated some 3,660 people from the area around the country's main manufacturing hub, San Pedro Sula, which was hit by Matthew as it powered along Honduras' Caribbean coast on Friday.

Honduran factories exporting to the United States avoided flooding, but grain and banana crops were damaged as rivers burst their banks. There were few immediate details of the extent of the damage.

The storm's maximum sustained winds decreased to near 25 mph (40 kph) on Sunday, the U.S. National Hurricane Center said. But it warned of continued heavy rains as a broad area of low pressure formed in the Caribbean over Nicaragua and Honduras, although it had only a small chance of becoming a tropical cyclone any time soon.

Coffee and sugar farmers face rain on fields already soaked from this year's active hurricane season. Growers worry that rain from Matthew could delay the start of coffee and sugar harvests, but expect to have a sense of the impact on Monday.

Sugar losses might be serious because cane fields are still flooded from earlier rains. Coffee trees also risk disease and fungus from too much moisture.

Central America produced 4.43 million tonnes of sugar in the 2009/10 harvest and was hoping for a larger crop this year. Guatemala, Central America's biggest sugar producer, forecast this month that its 2010/11 harvest would be 5 percent lower than the 2.34 million tonnes produced in 2009/10.

Matthew reached Nicaragua's coast on Friday, moved along the Honduran Caribbean and hit Belize and Guatemala.

More than 260 people have died in Guatemala so far this year in mudslides and flash floods. In 1998, Hurricane Mitch tore through Central America, killing more than 11,000 people. It was the second most deadly storm on record.