Ban told a church service in the cholera-afflicted rural village of Los Palmas in Haiti's central Plateau region that they had come to "express our solidarity" with the families of those who lost their lives. 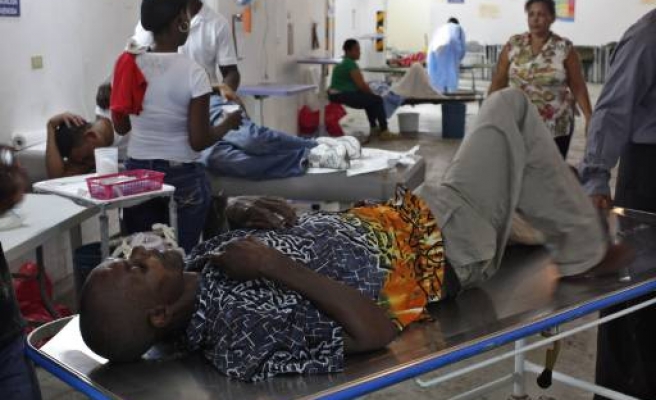 United Nations Secretary-General Ban Ki-moon flew to Haiti on Monday for what he called a "necessary pilgrimage" to promote efforts to alleviate a cholera epidemic that has killed thousands and has been linked to the U.N.'s own peacekeepers.

Ban is seeking support for a $2.2 billion, 10-year cholera-elimination campaign that he launched in December 2012 with the presidents of Haiti and the neighboring Dominican Republic.

Accompanied by his wife, Ban told a church service in the cholera-afflicted rural village of Los Palmas in Haiti's central Plateau region that they had come to "express our solidarity" with the families of those who lost their lives.

"My wife and I have come here to grieve with you. As a father and grandfather, and as a mother and grandmother, we feel tremendous anguish at the pain you have had to endure," he added.

The United Nations has so far not accepted responsibility for the outbreak that has killed 8,500 people and infected more than 700,000 since October 2010, despite evidence that it was brought to Haiti by Nepalese peacekeepers stationed near a major river.

Cholera, which had not been documented in Haiti in almost 100 years prior to the outbreak, is an infection that causes severe diarrhea that can lead to dehydration and death, and is caused by poor sanitation.

Together with the World Bank the United Nations is targeting 55 communities affected by the disease, covering 3.8 million people, within the next five years.

Donors had been slow to respond to the cholera elimination campaign, Ban told the Miami Herald newspaper, adding the United Nations has struggled to raise an initial $400 million needed in the first two years.

Ban also plans to travel to the Dominican Republic on Tuesday for talks with President Danilo Medina and will address a joint session of Congress.

Lawyers have filed three lawsuits against the United Nations seeking compensation for Haitian victims of the epidemic.

The Nepalese troops were stationed near a tributary of the Artibonite River and discharged raw sewage that carried a strain of cholera, sparking the epidemic, the lawsuit said.

An independent panel appointed by Ban to study the epidemic issued a 2011 report that did not determine conclusively how the cholera was introduced to Haiti. The U.S. Centers for Disease Control and Prevention said evidence strongly suggested U.N. peacekeepers from Nepal were the source.