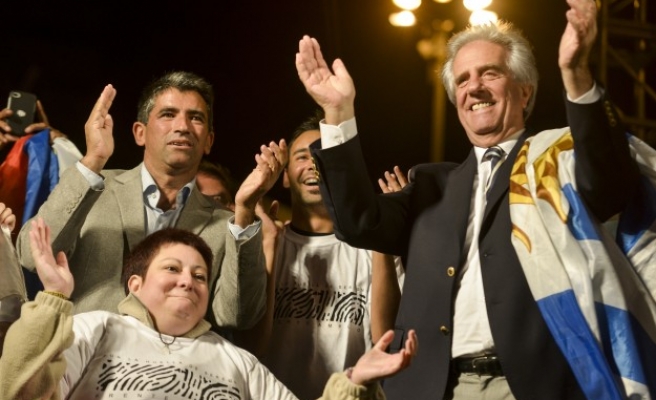 Tabare Vazquez won back his old job as president of Uruguay in a runoff election on Sunday, extending the decade-long rule of a leftist coalition and allowing it to roll out a groundbreaking law that legalizes the production and sale of marijuana.

Vazquez, 74, is a respected oncologist who helped heal rifts inside the Broad Front in the late 1990s and led it to power in 2005, ending two decades of conservative rule that followed a military dictatorship.

"I promise to work my utmost but I cannot, should not and do not want to work alone, I want to count on all Uruguayans," Vazquez told party loyalists on Sunday night.

When he was president from 2005 to 2010, his mix of welfare programs and pro-business policies helped kick-start a decade of robust growth and slash poverty.

Returning to power, he will succeed President Jose Mujica, an ally and former guerrilla whose straight-talking, unpretentious style won him widespread affection in the cattle-farming country of 3.4 million people.

"A third Broad Front government will show the world that Uruguay can be progressive and successful, reducing poverty while boasting an economy performing better than ever," said pizza chef Richar Martinez, 39, partying in the streets with his son hoisted on his shoulders.

The son of a union leader who grew up in a working class district in the capital, Vazquez closed his first term with approval ratings hitting 70 percent. Like Mujica now, he was constitutionally barred from holding a second consecutive term.

Vazquez will need to address rising crime and education, both major concerns of voters. He promises to increase spending on schools while cutting wasteful government spending.

He will also oversee Uruguay's legalization of the state-controlled production, distribution and sale of cannabis.

Vazquez, who lacks Mujica's folksy charisma, endorsed the cannabis law but was less enthusiastic about it than the outgoing president and has said he might modify it, depending on its impact.

Lacalle Pou, 41, had threatened to repeal much of the legislation if he was elected president, but he struggled to connect with working-class and rural voters.

The Broad Front narrowly won a majority in Congress in legislative elections last month, meaning Vazquez will be in firm control when his term begins on March 1.