If more progress is made 'then it's something that we'll consider', White House says 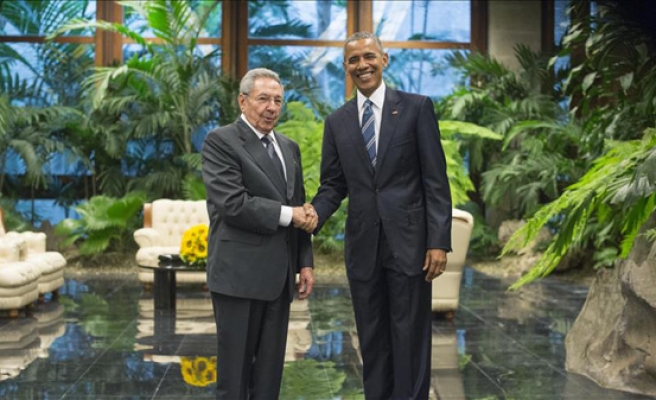 A potential U.S. visit by Cuban President Raul Castro is possible if sufficient progress is made to restore full ties between the countries, the White House said Monday.

“If we determine that there is a need for an additional visit and that that would serve a useful purpose, then it's something that we'll consider,” spokesman Josh Earnest said. “But right now, that's something I don't envision.”

Much of the diplomatic work that needed to get done as the countries continue to work toward a full normalization of relations was accomplished when Obama visited Cuba last week, Earnest added.

But major obstacles remain. Those include the status of the U.S. naval facility at Guantanamo Bay, which President Barack Obama has vowed to retain despite Cuban objections, compensation for U.S. businesses seized when the communist government rose to power and the U.S. embargo on Cuba, whose removal requires congressional action.

Republican lawmakers who have opposed the wider effort to restore relations have been intransigent on the matter, making it unclear if Obama will be able to clear the hurdle before he leaves office next year.

The blockade, which has been in place since 1962, is widely criticized on the island where it has stymied economic development and investment. It stands as one of the most significant impediments to a full normalization of ties between Washington and Havana.

During his visit to the island nation, Obama called it an “outdated burden on the Cuban people.”

The U.S. and Cuba announced an historic effort to reset relations in December 2014. In the ensuing 15 months, the countries have opened embassies and continued negotiations toward a full normalization.

Former Cuban President Raul Castro inked a scathing editorial Monday titled "El Hermano Obama", or "Brother Obama", in which he said his country "has no need of gifts" from the U.S.

"We do not need the empire to gift us anything," he wrote. Earnest said the piece is "an indication of the significant impact of President Obama's visit to Cuba."

Washington and Havana severed ties more than a half century ago in 1961.