The detentions came on Friday when mostly student demonstrators organised protests to coincide with seven months since the Feb. 12 start of a major wave of demonstrations. 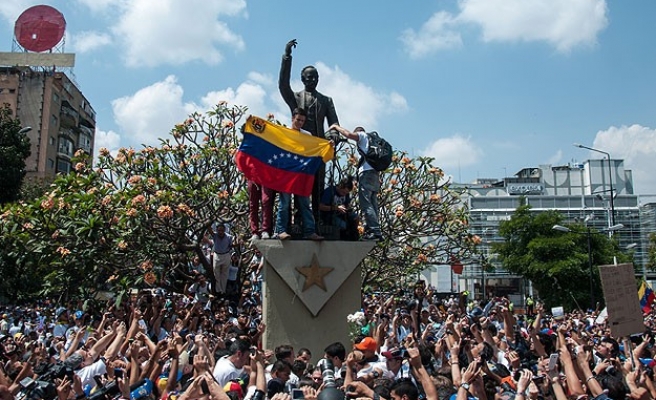 Venezuelan security forces have arrested 64 people during renewed demonstrations against President Nicolas Maduro's government in the capital as well as the city of Barquisimeto, a rights group said on Saturday.

The detentions came on Friday when mostly student demonstrators organised protests to coincide with seven months since the Feb. 12 start of a major wave of demonstrations.

"The protests have died down but are still sporadic, as we saw yesterday. Obviously the discontent continues," Alfredo Romero, head of the Penal Forum group, told Reuters, saying 47 people were arrested in Caracas and 17 in Barquisimeto.

The Venezuelan government has not given figures for arrests on Friday, but Maduro ordered police and National Guard troops to show zero tolerance toward any so-called troublemakers.

The successor to the late Hugo Chavez says the protests are promoted by opposition politicians and backed by the United States to destabilize his socialist government.

"We are not going to have even a minimum of tolerance with the protests ... I will have no hesitation in ensuring peace and justice, which is what the people want," Maduro said in a speech on Friday night, referring to the latest flare-ups.

Images on social media showed masked protesters facing off with security forces who fired tear gas - a common image earlier in the year during the violent clashes that rocked the South American OPEC nation daily between February and May.

Since then, there have only been the occasional small protest, with anti-Maduro activists' hopeful talk of promoting a "Venezuelan Spring" evaporating.

Friday's arrests add to some 68 people still behind bars from the more than 3,000 arrested during the February-May troubles.

Demonstrators' demands range from Maduro's resignation to fixes for economic problems that include the region's highest inflation and scarcities of basic consumer goods from milk to car parts.

The protesters accuse the government of repression and brutality. But Maduro accuses them of wanton violence in the streets, a hidden agenda to promote a coup against him and failure to accept his 2013 presidential election win.

The government appears at little risk, however, given its ability to quell protests quickly as well as the lack of popular support for the student demonstrators, the military's continued backing of Maduro and splits within the opposition movement.