The arrest comes a year after the outbreak of opposition protests calling for President Nicolas Maduro's resignation that rocked the OPEC nation and sparked violence killing 43 people. 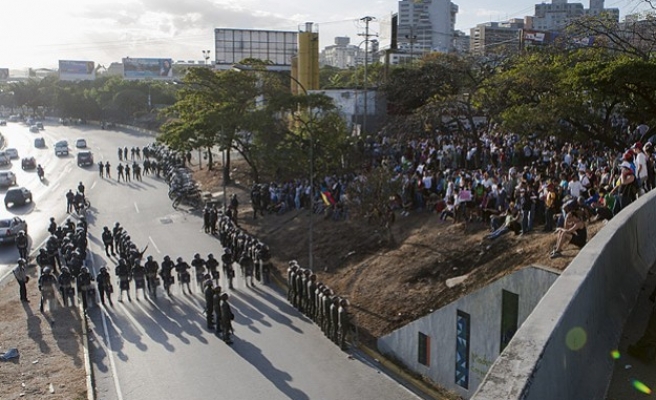 Venezuelan arrested opposition leader and Caracas metropolitan mayor Antonio Ledezma on Thursday in a move the government said was needed to halt a U.S.-backed coup plot but foes decried as tyranny.

Intelligence agents took the 59-year-old veteran politician from his office in the banking district of Caracas after breaking down doors and firing shots in the air, witnesses said.

"I just saw how they took Ledezma out of his office as if he were a dog," wrote opposition legislator Ismael Garcia via Twitter. "They broke down the doors without an arrest warrant."

The arrest comes a year after the outbreak of opposition protests calling for President Nicolas Maduro's resignation that rocked the OPEC nation and sparked violence killing 43 people.

Protesters and security forces have clashed sporadically around that anniversary, while a shrinking economy and chronic product shortages have sent Maduro's popularity tumbling.

His government in recent days said dissident air force officers had been planning to topple Maduro in league with opposition leaders and the United States. Officials cited an opposition document signed by Ledezma that called for a "national transition" as evidence he was involved.

Ledezma's wife and aides said late on Thursday they did not know his whereabouts or what he might be charged with.

Opposition leaders including two-time presidential candidate Henrique Capriles gathered at an intelligence detention center, known by some as "The Tomb," to demand his release.

In a live broadcast, Maduro accused Ledezma of links to an effort to topple the socialist government.

"On the orders of state prosecutors, he was captured and will be processed by the Venezuelan justice system for crimes committed against the peace of the country," the president said during a meeting with supporters at the presidential palace.

Ledezma joined the radical wing of the opposition in calling for "La Salida" or the "The Exit" of Maduro during the 2014 protests. Twice elected mayor, he was steadily stripped of many of his powers by late socialist leader Hugo Chavez.

Upstaged by younger opposition leaders, Ledezma is not seen as a future leader or even a standard-bearer of the opposition movement. Government supporters dub him "The Vampire" and mock him as an ageing dinosaur.

Maduro frequently denounces alleged coup plots by opposition leaders, usually without presenting much evidence. His predecessor, Hugo Chavez, survived a brief coup in 2002 amid protests supported by Ledezma among other opposition leaders.

Following Ledezma's arrest, Twitter users reported small street demonstrations in an upscale part of Caracas that was a center of protests last year.

Economic conditions have worsened since the 2014 protests, with tempers flaring in long supermarket lines as shoppers struggle to track down staples such as detergent, milk and chicken.

Colombian news station NTN24 showed a video of what it called the detention of Ledezma. The images showed nearly a dozen troops clad in flak jackets and camouflage uniforms ushering him toward an elevator.

Reuters could not independently confirm the video.

Venezuela has jailed a number of opposition leaders during the last year including Leopoldo Lopez, who helped spearhead last year's opposition protests, and Daniel Ceballos, former mayor of the border city of San Cristobal.

Washington, which endorsed the 2002 coup against Chavez before backtracking when he returned to power, has repeatedly denied any attempts to destabilize the Maduro government.

"The United States is not promoting unrest in Venezuela nor are we attempting to undermine Venezuela's economy or its government," the U.S. State Department said in a statement on Thursday. "We remain Venezuela's largest trading partner."