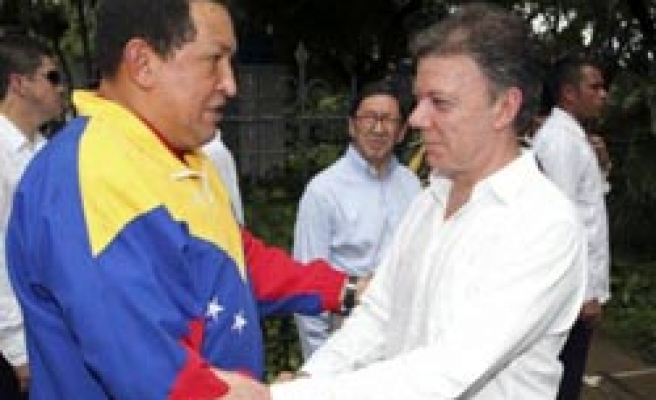 Santos and  Chavez met to mend relations after a diplomatic dispute that has stalled trade.

Both leaders arrived at talks in the colonial city of Santa Marta vowing reconciliation.

Both leaders will benefit from any move to restore $7 billion a year in bilateral trade as they seek to spur economic recovery.

"We are looking to restore relations between two brother nations," Santos said on arrival. "We're optimistic and we want this meeting to produce firm results."

Chavez arrived later and, after stepping out of his airplane, declared affection for Colombia in a brief speech quoting regional independence hero Simon Bolivar and Colombian author Gabriel Garcia Marquez.

"Despite all the storms, I come to ratify my eternal love for Colombia," he said. "Dear Colombia, dear Venezuela, dear peace and unity between us."

Dressed in a sports jacket decorated with the tricolor of the Venezuelan flag, Chavez marched side-by-side with Santos past Colombian troops and into a monument on the site of Bolivar's former colonial home.

Santos, a U.S.- and British-educated economist elected in June, has clashed before with Chavez, a Cuba ally who says his homespun revolution in Venezuela is inspired by Bolivar.

Santa Marta, a port town on the Caribbean sea, was where Venezuelan-born Bolivar died after his long fight to free the region from Spanish rule. Chavez has met several Colombian leaders there in the past.

Santos, who took office on Saturday, appears to be taking a more pragmatic approach to messy relations with Venezuela.

Chavez would also benefit from improved trade ties to give his popularity a boost with legislative elections in September.

Venezuela would gain cheap food imports from Colombia as he tries to control high inflation and Colombia would restore some trade with its traditional No. 2 commercial partner. Colombian companies are also looking to receive around $800 million in debts owned by the Venezuelan state.

News of the meeting and fresh possibilities that trade could be restored helped push up Colombia's peso currency in trading on Monday, the day after the talks were announced by the foreign ministers of both governments.

Colombia's long guerrilla conflict has often spilled over the Venezuelan border, where kidnappings and drug trafficking are common. Chavez complains that Colombia's military is not doing enough to secure the frontier.

Andean tensions have run high since 2008 when Colombian troops attacked a FARC rebel base hidden over the border in Ecuador. Both Quito and Caracas warned of war and sent troops to the frontiers before a regional summit defused tensions.

The most recent squabbling came after Colombia signed a deal to allow U.S. troops more access to its bases for anti-narcotics and counter-insurgency efforts. Chavez accused Bogota of working with Washington to undermine his government.