Venezuela broke off diplomatic ties with Colombia in a worsening row over public accusations from Bogota that it was providing a safe haven to leftist guerrillas. 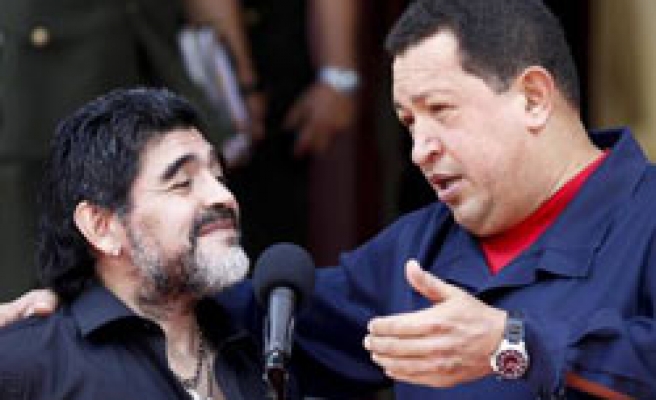 Venezuela broke off diplomatic ties with Colombia Thursday in a worsening row over public accusations from Bogota that it was providing a safe haven to leftist guerrillas.

"I announce with a tear in the heart: Venezuela breaks off from this moment all relations with the government of Colombia," Venezuelan President Hugo Chavez told reporters in his presidential palace in Caracas.

The announcement marked a fresh spike in tensions between the South American neighbors, which went to the brink of war in 2008 over a Colombian military raid into Ecuador to destroy a cross-border rebel camp.

Colombia, Washington's staunchest military ally in the region, and Venezuela have frequently quarreled over the past few years.

Uribe, in a statement last week, spoke of "the presence in Venezuela of terrorists who are seeking to attack our country."

Four FARC leaders and one from the ELN were in Venezuela, operating from there with impunity, he said, threatening to take the matter to international forums.

On Thursday, the Colombian representative to the Organization of American States, Luis Hoyos, told the Washington-based body that Bogota had evidence of "the consolidated, active and growing presence of these terrorist bands in the brother country of Venezuela."

Showing graphic photos of victims of attacks he said were carried out by Venezuelan-based guerrillas, he said Caracas must "accept its obligation" to bar the rebels from its territory.

Venezuela has strenuously denied the accusations, and last week recalled its ambassador to Bogota to register its anger.

Chavez called the Colombian accusations a "U.S.-inspired aggression," and said he was ordering "a maximum alert" on his country's long border with Colombia.

"We have no other choice but, out of dignity, to totally break our relations with our brother nation of Colombia," Chavez said as he hosted Argentine soccer hero Diego Maradona.

He claimed the outgoing Colombian leader was responsible for the dive in relations, saying: "Uribe is capable of ordering a fake camp be built on the Venezuelan side to attack it and cause a war."

He warned that "we would go crying to a war with Colombia, but we would go."

Venezuelan Foreign Minister Nicolas Maduro said he had ordered the closing of Venezuela's embassy in Bogota and gave the Colombian mission 72 hours to leave. He said Caracas was considering other measures, such as suspending flights.

But Chavez added he hoped that Colombia's newly elected leader, Juan Manuel Santos, who will take office on Aug. 7, would help bring relations back to normal.

President-elect Santos, in Mexico to meet President Felipe Calderon, told reporters: "The best contribution we can make is not to make any pronouncement. President Uribe is president of the republic until Aug. 7.

Chavez said he had spoken to both Lula and Kirchner.